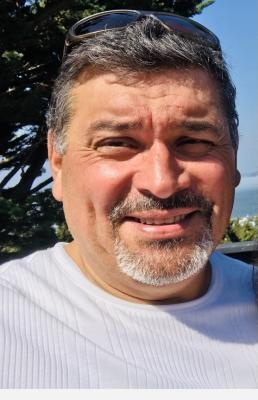 Obituary:
with profound sadness and heavy hearts to tell the world that on December 29, 2021 a bright beam of light left this world. We knew and loved him endlessly as our brother George Acevedo. But to countless others he was a wonderful friend. Truly, his brightest light that shined through was his love and devotion that he had for his son Alec.
George Acevedo, 54, passed away in the early morning of December 29th, 2021 at Mercy Hospital of Folsom, CA after a four month fight to survive. He passed away holding the hand of his sister, Patti Acevedo Callahan, who was always by his side as his biggest advocate throughout his illness.
“ If love alone could have saved you, you never would have died.”
George loved so many and was loved by so many more.
He had an energy that with even just one encounter with him, you would remember him for life. If you knew him well or barely at all, he always left you thinking.
Whether it was how absolutely funny he could be or his so-called ‘teaching moments’ when debating a particular subject or his huge heart with his love and zest for life... all are moments that will forever leave his mark on the hearts of those who loved him.
He will continue to stay with us through memories and the laughs he forced us all to endure whether we were in the mood for it or not.
We will see him everywhere. Any time you hear the roaring sounds of a NASCAR race track or as you’re flipping the TV channels on a Sunday Morning and stumble across CBS Sunday morning with Jane Pauley, which he loved to watch with his girlfriend Jenny.
George was born in Los Angeles, CA on May 17th, 1967 to Hector and Celia Acevedo.
George graduated from Ukiah High class of 1986 and after graduation attended Arizona Automotive Institute where he earned his degree in automotive repair specializing in transmissions. His degree started a life long passion in the automotive industry. He owned several transmission shops over the years. He owned Pro Built Transmissions in Placerville, California, AAMCO Transmissions in Placerville, California and most recently Trans Builder by Demand in Sacramento, California. He had a passion for teaching, which is what lead him to become a teacher/instructor at Universal Technical Institute in Sacramento, CA. He was so loved by his students, his fellow instructors and staff.
But George’s true passion was his love and devotion for his son Alec. He absolutely loved being a hands on Dad. He could always be found at the race track cheering on his son as he raced quarter midgets, go carts, Mini Cup or 500 midget sprint cars. They spent endless weekends at his transmissions shop teaching Alec the ins and outs of transmission building.
George was such a light in this sometimes dark world and he will be deeply missed by all who were lucky enough to know him. He touched the lives of so many people. During his time with us, he made a point to always help anyone with whatever he could, never second-guessing his decision. Anyone who knows George, knows that his family meant everything to him and in his eyes, each of you reading this were family or you wouldn't be here.
His love of life was evident in the way he lived. Even just sitting on the couch turned into a fun time with family, friends and of course, food! For us, he really is that pebble thrown into a lake... as the lives he touched act as ripples that extend far beyond just us.
George was selfless and put others first. He was fun loving, outgoing and had a zest for life. He was an example to so many and a shining light to all who knew him. When you think of George celebrate the good memories you have of him. Remember that life is fragile and short and should be lived to the fullest. He will be missed more than any words could express but he will be forever in our hearts till we meet again.
George is survived by his son Alec Ryan Acevedo who was the light of his life, his Mother Celia Acevedo, Brothers Jose Acevedo(Amelia), Robert Acevedo, Sisters Juanita Acevedo(Dennis), Olga Acevedo, Patti Acevedo Callahan(Scott), Nephews and Nieces, Brandon Acevedo, Conner Acevedo, Hannah Acevedo, Samual Acevedo, James Acevedo(Frances), Raymond Mackenzie, Samantha Acevedo, Kristi Brooks and his Girlfriend Jenny Rodriguez whom he loved dearly.
George was preceded in death by his Father Hector Acevedo(2006).
Services will be held at Eversole Mortuary, 141 Low Gap Rd, Ukiah, Ca. 95482, on Friday, January 28, 2022 @ 11:00am. Burial will follow at Rush River Ukiah Cemetery, 940 Low Gap Rd, Ukiah, Ca.95482. There will be a gathering of family and friends directly after at the home of Robert Acevedo.
“God saw you getting tired
and a cure was not to be,
so he put his arms around you,
and whispered, “Come to Me,”
With tearful eyes we watched you
and saw you pass away.
Although we loved you dearly,
we could not make you stay.
A golden heart stopped beating,
hard working hands at rest.
God broke our hearts to prove to us,
that he only takes the best.”


To order memorial trees or send flowers to the family in memory of Acevedo, George, please visit our flower store.