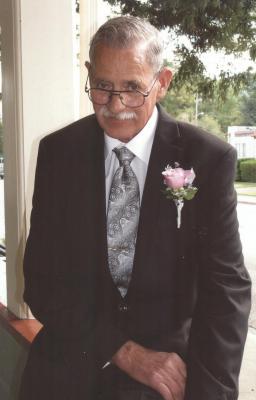 Funeral Services for Jerry D. Allen of Ukiah will be held on Monday, December 15, 2014 at 12 noon at Eversole Mortuary. Pastor Michael Koelling of Calvary Way Church will officiate. Visitation will be from 9 to 11 a.m. on Monday. Interment will be in Ukiah Cemetery. Jerry passed away on Wednesday, December 10, 2014 at Ukiah Valley Medical Center.
Born September 12, 1943 in Cape Girardeau, Missouri he has resided in the Ukiah area for the past 50 years. Jerry graduated high school and worked as a millwright at Crawford Lumber Co., G.P. and L.P. Lumber Companies. He was a member of the Ukiah Gun Club and the National Rifle Association. He was very proud of his children, grandchildren and his woodworking projects. He will be remembered as a family man who worked hard to make sure the needs of the family were met. He liked to fish and go camping. He was a master woodworker.
Jerry is survived by his wife Tia Allen of Ukiah, daughters Robin Wilmott and husband Cedric of Fairfield, Stacy McCoy and husband Allen of Ukiah, sister Eunice Allen of Cape Girardeau, Missouri, grandchildren Zach Wertzberger, Devyn Boesel, Kasey Eaton, Zack Boesel, Kody Eaton, Colton Boesel, Miranda Boesel, Jacob Boesel and great grandchildren Colton and Briston Wertzberger. He was preceded in death by his first wife Barbara Allen, son Scott Wertzberger, parents Luther and Edna Allen, sisters Dorothy, Noma, Pauline and Lawanda and brothers Earl and Hubert.
Memorial contributions to the American Cancer Society or the American Heart Association are preferred.

To order memorial trees or send flowers to the family in memory of Allen, Jerry D., please visit our flower store.