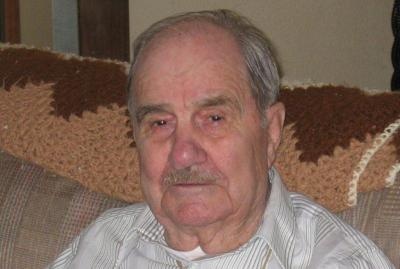 Robert Anton Amundsen passed away peacefully in Antioch, California, November 15, 2015, with his family by his side. He was a native of Fort Worth, Texas, aged 97. He married Maxine Jemeyson in 1941. He served his Country in the US Navy from 1936 to 1945, receiving several awards for service in the Pacific Theatre during WWII. Robert’s career included being Sgt. with the Ukiah Police Dept. and Chief Criminal Deputy with the Mendocino County Sheriff’s Office. Robert retired from the Navy and Army Corps of Engineers. He resided in Rohnert Park prior to moving to Antioch 11 years ago. Robert will be remembered for his honesty and integrity, and his love for his family. He was the beloved father of Anton “Tony” (Thomasina) Amundsen, loving grandfather of Dawn (Jon) Restani, Heidi (Rich) Myers, adored great grandfather of Joseph, Justin, Jason, and Joshua. He was preceded in death by his wife of 63 years, Maxine, his sister, Adeline Barnette, and his parents.
Viewing and internment will be at Eversole Mortuary – Evergreen Memorial Gardens, Ukiah, CA, Tuesday, November 24, 2015 at 11:00 a.m. A celebration of Robert’s life will be held Friday, December 11, 2015, 2:00 p.m., at Cypress Meadows, 3950 Lone Tree Way, Antioch, CA.
The family is forever grateful to the Staff at Cypress Meadows Assisted Living Facility for their loving care and assistance. The services of Sutter Health Hospice were also greatly appreciated.

To order memorial trees or send flowers to the family in memory of Amundsen, Robert Anton, please visit our flower store.