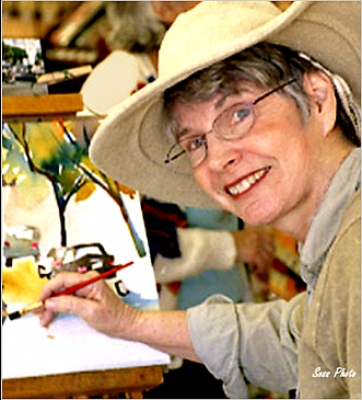 Patricia was born in Seattle, Washington on June 12, 1939 to Ruth Imogene (Marsh) and Vincent Clifford Buck.
Vincent was in the real estate business, working as a salesman. In 1942, he was transferred to Spokane to serve as a supervisor of the large home building project. So Patricia and her younger brother, Roger, grew up and went to school in Spokane.
Patricia attended Eastern Washington State College and Whitworth College, earning a B.S. in Education.
She met and married Robert John Barnett in 1960 in Spokane.
The Barnetts, first Patricia and Robert, then increasing to Valerie, and then Julianne lived in Seattle, then Texas, then Long Beach, finally settling in Ukiah.
Patricia had worked as a first grade teacher in Long Beach and later for Welcome Wagon in Ukiah.
Arriving at her calling as an artist, Patricia began painting watercolors in 1978, receiving her first award in 1980. She went on to win numerous awards at county fairs and other venues. Patricia’s art embraces everyday life.
“I see art everywhere in common places such as street signs, bikers, buildings, automobiles. My faith in Christ is strong and because I believe that He has blessed me with this gift – seeing art – I feel compelled to use it…Irrepressible Exuberance is my style.”
Patricia’s parents were developing serious medical problems, so she arranged help for them in Spokane, until their conditions worsened, then moved them to Ukiah, Vincent to a care facility, Ruth to live with her, through the remainder of their lives.
Patricia and Robert greatly enjoyed and loved their large family of children, grandchildren, and great grandchildren.
Patricia and Robert were active members of the Ukiah Bible Church.
A graveside service were held at Russian River Cemetery in Ukiah, California. Wednesday, December 27, 2017.

To order memorial trees or send flowers to the family in memory of Barnett, Patricia Jean, please visit our flower store.