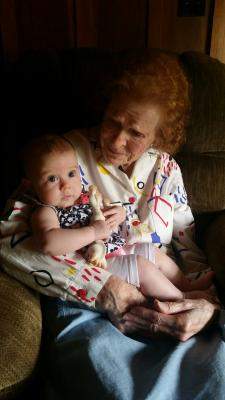 Obituary:
Doris Baron was born in Canada on October 30, 1922. She moved to the United States in the 1930’s with her sisters Meredith and Ruth and her brother Stanley. She was always grateful to the United States for taking in her family during a depression when so many Americans were hungry and out of work themselves. Her father was a carpenter and her mother was a real estate broker. Doris graduated from U.C. Berkeley during World War ll and married her husband John soon thereafter. Her brother was killed in the Philippines during the war. She got her master’s degree in Library Science from USC and worked as a librarian at Marymount College, the U.S. Navy Postgraduate School in Monterey, and the Cal State University Marine Lab in Moss Landing. She retired to Lakeport in 1978.
She had a daughter, Kathleen, and a son, John; three grandchildren: George, Melody, and Christine; and two great-grandchildren: Baron and Natasha. Her brother in law Frederick Belsey remained her good friend since the 1950’s. Above all, she loved her family. Her husband John and sister Meredith predeceased her.
Doris had many friends in the Lakeport area who helped her remain living in her house and she found much joy with them, especially during her weekly bible discussion meetings.


To order memorial trees or send flowers to the family in memory of Baron, Doris E., please visit our flower store.