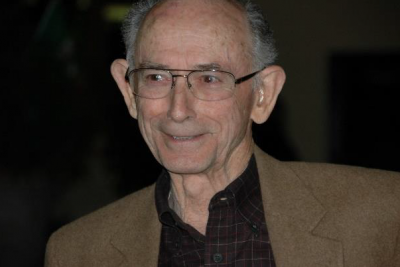 Obituary:
Fondly referred to as Mendocino County’s “godfather of grape growing”, Charles L. Barra was born December 12,1926 in Calpella, CA to second generation Italian immigrants Antonio Barra and Maria Rovera. As a young boy working alongside his grandfather and father in the rich, Redvine soils of Redwood Valley, Charlie learned the ins and outs of farming wine grapes in Mendocino County. These formative years would serve as the foundation for 73 years of grape harvests, over 40 years as a passionate advocate for the California North Coast Grape Growers Alliance, and more than 20 years in public service.
Charlie’s love for, and dedication to, Mendocino County was unwavering. A true steward of the land, Charlie was forever searching for ways to improve agricultural practices, as well as ensure that grape growers like himself were being fairly compensated (and recognized) for the quality fruit being grown in Mendocino County. As a founding member and president of the North Coast Grape Growers Alliance, Charlie lobbied for a variety of grower causes, including varietal percentage change in wines from 51% to 75%, the first appellation designation in the U.S, and for pricing regulations that said a grower and winery had to agree on prices before grapes were crushed. Further cementing his iconic role in the North Coast wine business, Charlie worked with the board of directors of the California North Coast Grape Growers Alliance to form a limited partnership of investors, who proceeded to purchase the renowned Souverain Winery in Sonoma County (now known as the Francis Ford Coppola Winery) in 1977. Charlie, along with three other wine industry veterans (Eugene Cuneo, John Balto and Leroy Chandler) were the chief architects behind the purchase of the property and the Souverain wine brand. Ownership of this entity remained in place until it was sold to Beringer in 1983.
Charlie’s commitment and devotion to his community went beyond just agriculture. From the early 60’s to the late 70’s, he was involved in a variety of public service positions including being an active member of the Mendocino County Planning Commission, as well as being appointed to the Mendocino County Board of Supervisors by Governor Ronald Regan. The results of his work to create the St. Mary’s School Foundation, and his 21-year tenure as president are still visible today. While his quick wit, twinkling eyes and impish grin will certainly be missed by all who knew and loved him, his legacy and inspiration will live on in the lives of so many he touched along his amazing journey through 92 years of life.
Charlie passed away peacefully at his home in Ukiah on Saturday, June 29th . He is survived by his wife of 39 years, Martha Barra, daughter Antoinette Barra, and Martha’s children Shelley Maly and Shawn Harmon, as well as four grandchildren.
In lieu of flowers, donations can be made in Charlie’s name to the St. Mary’s School Foundation, Charles L. Barra Endowment. A service for Charlie will be held on July 24, 2019 at 3:00 pm at Eversole Mortuary in Ukiah, CA

To order memorial trees or send flowers to the family in memory of Barra, Charles L., please visit our flower store.