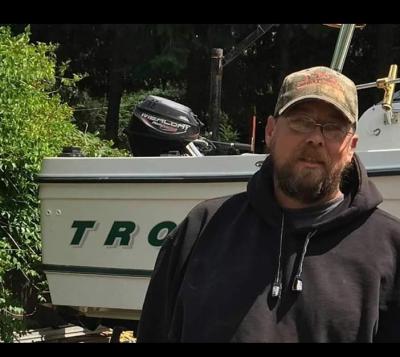 Visitation Information:
A “celebration of life” memorial will be held Saturday January 18, 2020 at the Redwood Valley Grange Hall at 1pm.

Darren Kyle Beck passed away in the early morning hours on December 10, 2019 at the age of 41 at his mom’s home in Redwood Valley of complications from juvenile diabetes, which he battled bravely for 33 years. He was diagnosed with diabetes in 1986 at the age of 8.
He was born June 13, 1978 in Ukiah and lived in Mendocino County almost his entire life. He attended Deep Valley Christian School early on, then Calpella School and Redwood Valley Middle School, Ukiah High. He was a tire technician for nearly a decade, a carpenter, a concrete finisher, and a legendary gardener. He enjoyed the outdoors greatly and was a zealous kayaker, deer hunder, fisherman and disc golfer. His entire year revolved and deer season and his children; which he was most proud of and who could do no wrong in his eyes.
He was in scouts when he was young, winning first place in the pinewood derby, participated gymkhana rodeo where he received several championship buckles, and had many first place finishes in disc golf playing side by side with his friends and son Johnathon.
Darren will be remembered most of all as a great friend to too many people to list.he had hundreds of friends that he made throughout his life and maintained many of those friendships for almost his entire life. He was the original “Rippy,” Redneck Hippy. His love for his dogs: Bosco, Junior, Poe and lastly Warden almost matched his love for his children. His dogs were also his children.
It seems like Darren’s main goal in life was to do things his own way, you were not going to tell Darren what to do, and to know every person on the planet. And it worked for him. Everyone knows Darren Beck in Redwood Valley. We can hear his favorite saying every day in his own voice: “Sweet”, or “What’s Happening?”
He was preceded in passing by all his maternal and paternal grandparents.
He is survived by both his parents, his father John E. Beck of Ukiah, mother Joann Jordan and step-father Jack Winter of Redwood Valley, his son Johnathon Beck, age 16 of Ukiah and by his daughter Dalyla Beck, age 9 of Ukiah and his step-son Damian Young, 13 of Ukiah. He is also survived by both his brothers: his oldest brother Gregory Lee Beck and his partner Susan Sowell of Tallahasee, Florida, and by his oldest brother Bradley R. Beck and his partner Carlee Lightel of Redwood Valley. He is also survived by many aunts, uncles, cousins, nieces and nephews from all around the country.
His ashes were spread by his immediate family in the Lake Pillsbury area just after Christmas.
Our son, brother, father and friend was taken from us far too early. His untimely passing has affected his entire family greatly and many are having a hard time coping with this loss. He would have never, in a million years, chosen to leave this world this early. But God had other plans for him. We are the ones left to pick up the pieces. The consolation is that he is no longer suffering from the tragedy of diabetes and all of the health problems that come with it.
The testament to the life he led is the hundreds of friends he made in his lifetime. He was a true friend and good neighbor to scores of people: too many to count. Our brother. Father. Son and friend was a truly great person and friend. His family would like to thank everyone for the kind words and support we have received since his passing from so many. This again reflects the kind of friend he was to so many people for so many years.
A “celebration of life” memorial will be held Saturday January 18, 2020 at the Redwood Valley Grange Hall at 1pm. Please join us, his family, to help honor Darren. If you are so inclined, please bring a dish to share since this is a potluck. No alcohol will be served.
Darren was the ultimate river rat and every summer floated down the Eel River with his friends from Trout Creek Campground to the Luau bridge and they did this almost daily. In his memory, the first annual Darren K. Beck river float will be held on his birthday at noon on Saturday June 13th, 2020 to pay homage to his love of the river and his friends. We plane on making this an annual tradition.
In lieu of flowers, at his family’s request, donations can be made, if you can afford it to a “memorial children’s fund” which has been established in his honor to benefit his children. Donations can be given at the memorial, or sent to:
Savings Bank of Mendocino County
Darren Beck’s Memorial Fund
PO Box 3600
Ukiah, Ca

To order memorial trees or send flowers to the family in memory of Beck, Darren Kyle, please visit our flower store.