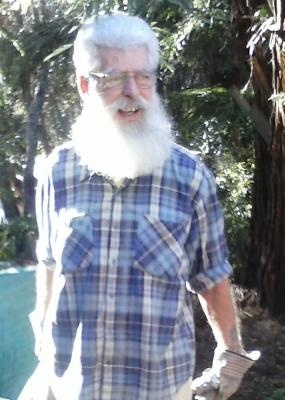 Richard was born in Sacramento & grew up in Napa, Calif. He attended Santa Rosa JC , and transferred to Sonoma State University for his bachelors degree. He was a Registered Nurse.

During the Vietnam era, Richard worked as an Army Nurse at Walter Reed National Military Hospital in Bethesda, Md. caring for wounded soldiers who came directly from overseas combat. It was an experience he described as rewarding, devastating and life changing.

After his military service, he returned to Calif where he continued his career in nursing, working at a variety of hospitals in different communities. In between jobs, he traveled extensively throughout central & south America.

Richard moved to Boonville, CA in 1984 where he lived with his wife, Judi & a variety of dogs. They could often be seen on their daily walks around the Boonville area & along AV Way.

He had a great love of nature & was especially fond of hiking & exploring new areas. Frequent camping trips were a favorite activity.

He enjoyed his home in Boonville & spent many hours working in the yard, gardening or just relaxing in the hot tub.

Richard is survived by his loving wife Judi, his brother Bob & several nieces & nephews. He lived his life, laughing, loving & learning. He will be sorely missed.

If desired, donations can be made in his memory to Hospice of Ukiah.


To order memorial trees or send flowers to the family in memory of Bennett, Richard M., please visit our flower store.