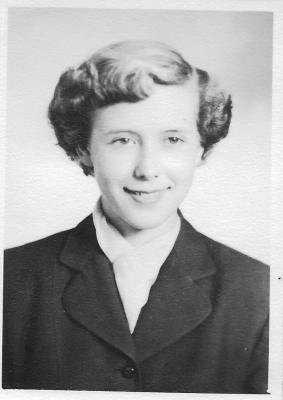 Obituary:
Joyce Elaine Berke, age 80, died peacefully at her home in Redwood Valley on December 14th, 2016. She was born 4/30/36 in Litchfield, Nebraska, to Graydon & Gladys (Holm) Anderson and was the youngest of two children.
Joyce grew up on the family ranch outside Valentine Nebraska and enjoyed the outdoor life it offered. She spoke fondly of both driving and riding the horses, helping with the cattle, and the companionship of her dogs. She graduated high school in Valentine Neb, attended Loretto Heights College Colorado, and received her Bachelor of Science degree from Colorado State University at Ft Collins in 1957. She continued her education throughout her life, even as she raised 4 children on her own.
She was married to William H Hunt in Sept of 1957 & had four children.
She married again in February of 1973 to Raoul Berke. She received several awards for her community service - Inner City Ministry with the Presbyterian Church in Cleveland 1958-65 - Social Services Award with the Indian Affairs - Chamber of Commerce Ambassador - even a Presidential Volunteer Service Award in 2008. Joyce is preceded in death by her partner and soulmate Charles Hagedorn, just 7 days prior to her own death, and by her parents.
She is survived by her sister Janet, 4 children (Wren, Laurel, Tim & Andy) and their families, grandchildren & great grandchildren. There will be a private service for her memorial & celebration of life, to be held on January 7, 2016 at her home in Redwood Valley.
Joyce left us the greatest legacy of all. To love, care for and help one another, as family, friends and as a community, and her joy in life.


To order memorial trees or send flowers to the family in memory of Berke, Joyce Elaine, please visit our flower store.