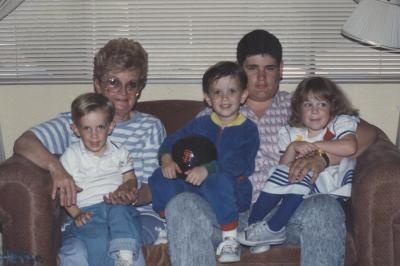 Obituary:
Gertrude “Gert” Brennan (8.26.24 – 7.08.17) was born to Charles W. and Louise C. Sanders in Sacramento CA on Aug. 26, 1924. She graduated Sacramento High School in 1942. She was a strong woman who, with her family, worked to survive and rise out of the great depression.
As our country fought World War II lives changed and Gert lost her beloved brother “Bill” in the Pacific. Then she met her soon to be husband Richard “Dick” Brennan, a young sailor on a weekend leave in Sacramento. They kept in touch and he looked her up again after the war. They married in 1943 and settled in Sacramento. Dick took a job with Pacific Bell soon transferring to Morro Bay and eventually deciding to take a transfer to Ukiah.
As mom found her way in the new community of Ukiah the children attended St. Mary’s School. She enjoyed being a member of the school’s “Mothers Club” - spearheading fund raising events such as “hot dog day” lunches. Gertie had spunk and as the kids got older decided to make a little extra spending money becoming an Avon lady. She established a customer base going door-to-door and introduced her daughters to a whole new world of makeup in Avon samples. During the Vietnam War era her oldest son Michael enlisted into the Air Force. As a distraction while she awaited his return, and with encouragement from friend Mary Elder, she took a bookkeeping class. As she completed her studies she started working at Rexall Drug as a clerk, working her way up to pharmacist’s assistant. She made many friends during that time and was known as Gertie (nicknamed by John Keefe, her manager for many years), working alongside her daughter Theresa, daughter-in-law Donna Bonini and future son-in-law, Jim Hughes. Gertie stayed with Rexall until its close and soon caught up with her dear friend Pam Brown at the Tack Room.
She was an accomplished seamstress sewing beautiful dresses and tailoring clothes for her kids. She also enjoyed crocheting, and embroidering pillow cases and dish towels with her mother. She liked the outdoors and was an avid walker, or could be found fishing at the dams. Gert was foremost a racing fan, and was thrilled to attend NASCAR and Drag races at Sears Point. She attended many races at the local speedways with a bomber beer in hand. Mom just loved hot, loud and fast cars and never refused a ride in Houie’s Corvette!
Gertie was predeceased in death by her mother Louise, father Charles, brother Bill, uncle Albert, daughter and son-in-law, Harry and Theresa Van Antwerp, and Donna Minnie. Gertie leaves behind her children Michael (Patty), Patricia (Houston) Speer, and Timothy (Julie) Brennan, her grandchildren Darby (Krista) Brennan, Tiffani Brennan, Kyle (Tenaya) Hughes, Brett (Erika) Hughes, Tobias (Christin) Brennan, and Great-Grandchildren Gemma, Gioia and Kaiden Brennan.
Gertie was tenderly cared for by her family and angels, Sylvia Aguilera, Elisa and Esther Sanchez and all the angels at Holy Spirit Residential Care Home. A special thank you to Perla and Genaro.
There will be a graveside service on Thursday, July 13, 2017 @ 10:00 am at Russian River Cemetery and a gathering immediately afterwards at Vinewood Park on Elm Street in Ukiah. In lieu of flowers, the family suggests donations to Hospice of Ukiah.


To order memorial trees or send flowers to the family in memory of Brennan, Gertrude, please visit our flower store.