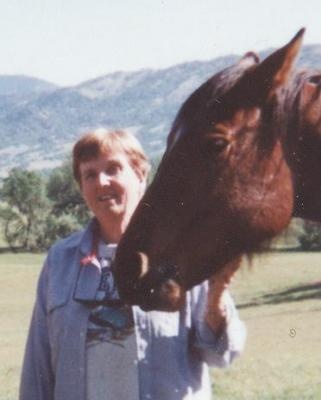 Patricia H. Brown (Pat) age 81 of Potter Valley passed away on July 15. She was a loving wife, mother, grandmother and great grandmother. She was dedicated to the community of Potter Valley which she so dearly loved for the 70 years she lived there. She was a long time 4H leader and supporter of the junior livestock auction at the Redwood Empire Fair. Pat was actively involved in supporting the local Potter Valley schools when it was private donating time and land. For ten years the Potter Valley Rodeo was held on the family ranch lands with the proceeds going to the school and local organizations. She was an integral member of the group that led the fight to once again make Potter Valley a public school system, which ultimately became known as the Potter Valley Community Unified School District. She also served on the school board for many years before and after it became a public school system.
Pat and Jack worked side by side on the family ranch for over 50 years. She enjoyed it all, whether it was working cattle, riding horses, raking hay or anything to do with the outdoors. One of her favorite things was to go out and check the cattle at calving time and watch the baby calves run and buck.
Pat enjoyed raising her own children and also never minded when we would have a couple friends show up for a meal or needed a place to stay her door was always open.
Pat who was a big sports fan especially for her beloved 49ers and Giants.
We will miss her faith, dedication, smile, selflessness, compassion, values and endless energy but we take solace that she is in a better place.
She is survived by her husband Jack of 60 years, daughters Judy Barbera (Steve) Emmett, ID, Kathy Brown San Jose, sons Jim Brown Potter Valley, Don Brown (Rhonda) Potter Valley, Ken Brown (Barbara) Kerman, Dave Brown Potter Valley. 7 grandchildren and 6 great grandchildren.
She is preceded in death by sons Little Jack and Bob, brothers Greg and Mike and sisters Libby and Bobby.
A graveside service will be held at the Potter Valley Cemetery at 10:30 am on Friday July 24 followed by a celebration of life at the Potter Valley Methodist Church on Main St in Potter Valley.
Arrangements & Care under the direction of Eversole Mortuary.

To order memorial trees or send flowers to the family in memory of Brown, Patricia H., please visit our flower store.