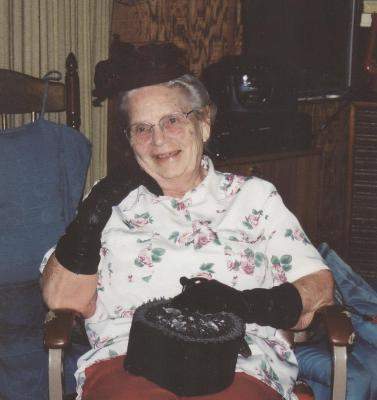 Iva Marie Burns age 90 passed away on Monday, November 3, 2014 at Circle B Ranch, her home in Redwood Valley. She was born in Bernalillo New Mexico on July 20, 1924 to Ivy Lena Bailey and Solon Lee Mitchell. Marie was the oldest of four children. She graduated from Bernalillo High School and then went to work in the local lumber mill as a secretary and book keeper. She wrote letters to Paul Revere Burns who had been her sweetheart since they were 14 years old. When Paul was returning from his Army Service in World War II he wrote to her to quit her job as they were going to marry as soon as he arrived home. They were married on February 9, 1945 at the Baptist Church in Bernalillo. They relocated to Richmond California where they started their family. They soon relocated to Northern California living in Mill Camps at Pino Grande and Johnsondale. Following this they bought their first home in Camino California. They then relocated to Boonville California in 1956 where they settled, to raise their three children, Paula Marie, Ronald Lee and Loyce Verdel. Throughout the years of raising her children Marie was a gentle and sweet Christian lady who made sure that her family attended church. She created a warm and open home where everyone was welcome. and fed a big meal. Every summer there were many nieces and nephews biological or otherwise who were welcomed into her home. Under her guidance they were taught how to work and use their manners. When the family relocated to a ranch in Boonville area she grew a huge garden and helped out with milking the cows and herding the sheep. She also drove a tractor and helped out with the harvesting. In 1968 the family moved to Redwood Valley and Marie became the Administrator of Circle B Ranch Incorporated a non profit corporation. Raising children had always been the main focus of her life and Marie, along with her husband Paul, began a home for children with special needs. Marie set up an on grounds school to meet the educational needs of those children. She surrounded them in her home with kind discipline, good food and lots of love. She cared for 36 children during these years and closed the home in the 1980;s. During these same years she was an amazing grand mother to 19 grand children and made sure they learned basic life skills. Marie believed in God and the power of prayer. Her life was a positive witness to all who new her. She is survived by her sister Helen Jackson and brother SL Mitchell and sister in-law Anita Mitchell, husband Paul and her children Paula and husband John Heron and their children, Barbara Douglas, Lisa, Phoebe, Rachael, Corrie, Joseph, Jonathan, Benjamin, Elizabeth and Meghan; her son Ronald and wife Lee, and their children, Paul, Heather, Isaac, Nathan and Joel; her daughter Loyce and her children Saundra, Graeme and Jessi and 39 great grandchildren and 3 great, great grandchildren. Marie was an expert seamstress who enjoyed crafting quality items. She had a lifetime enjoyment of quilting, sewing, crocheting and furniture upholstering. Marie believed in the power of loving children and prayer. She was a mom and grandma and aunt to anyone who needed her to be. She always had time for every child and taught them all how to play table games. She will be profoundly missed by all who knew her.
A viewing will be held at Eversole Mortuary in Ukiah, California on November 14, 2014 from 12 noon to 8pm. Funeral services officiated by Pastor Joe Fry will be held at the same location on Saturday November 15 at 1pm to be followed by graveside services at Boonville Cemetery at 3pm. A gathering of friends and family following graveside services will be held at the Redwood Valley Community church on School Way in Redwood Valley.
The family prefers memorial donations to the Gideons International is PO Box 113 Ukiah CA 95482


To order memorial trees or send flowers to the family in memory of Burns, Iva Marie, please visit our flower store.