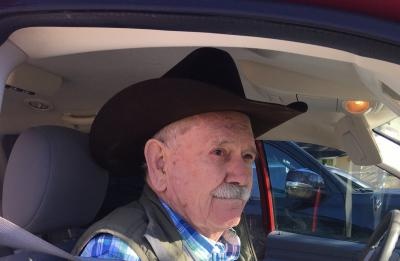 Obituary:
Paul Revere Burns, age 95 passed away on Monday, July 13, 2020 at his home in Hopland, CA. In spite of the various mistakes recorded on his birth certificate, his mother verified that he was born, the eighth child of thirteen, to Malachi Burns and Carrie Verdel Ryder, in Hope, New Mexico on November 7, 1924. His family, eventually moved to Bernalillo, New Mexico, when he was 11 years old, where he met Iva Marie Mitchell. They married on February 9, 1946 at the Baptist Church in Bernalillo, after he returned from service in the United States Army, in WWII. He enjoyed retelling stories of his time in the service and his tour of duty through the South Pacific. When he returned, he moved with Marie to Richmond, California and he opened a furniture store with his brother. Eventually, he learned the trade of saw filer and then he moved to Johnsondale, CA to work in the mill. He was known throughout Northern California for his skills in the sawmill. He settled his family, in Anderson Valley, California, where he and Marie raised their children, Paula, Ronnie and Loyce. He was also on the school board, operated a sheep ranch and continued his work as a saw filer. In 1969, Paul, along with his wife Marie, began a home for children with special needs, Circle B Ranch, in Redwood Valley, CA. He was a strong Christian leader in his family, and the community, serving on the board of Deep Valley Christian School for many years, and as a Gideon for the remainder of his life, 55 years. He believed in God and the power of prayer. He welcomed family and visitors into his home and entertained them on his harmonica for many enjoyable evenings. He is preceded in death by his parents, and 12 brothers and sisters, his wife Marie, and his son Ronnie. He is survived by his brother-in-law, Jack Sparks, sister-in-law Sue Burns, his daughter Paula Burns-Heron and husband John Heron and their children, Barbara, Douglas, Lisa, Phoebe, Rachael, Corrie, Joseph, Jonathan, Benjamin, Elizabeth and Meghan; his daughter-in-law Lee, and her children, Paul, Heather, Isaac, Nathan and Joel; his daughter Loyce and her children, Sandra, Graeme and Jessi and 41 great grandchildren and 4 great, great grandchildren. He will be profoundly missed by all who knew him. A viewing will be held at Eversole Mortuary in Ukiah, California on Friday, July 24 from 2 to 8 pm. Graveside services will be at Boonville Cemetery on Saturday, July 25 at 10 am. Memorial donations may be made to the Gideons International, c/o Paula Burns-Heron, P.O. Box 156, Redwood Valley, CA 95470.


To order memorial trees or send flowers to the family in memory of Burns, Paul Revere, please visit our flower store.