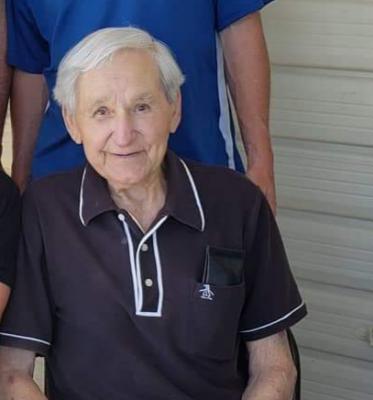 Edmund James Buschbacher was born November 22, 1926 in Beulah, North Dakota. He was the son of Frank and Theresa Buschbacher who had immigrated to the United States. Ed had seven brothers and sisters who all preceded him in death: Anna, Frank, Matthew, Gertie, Louie, Sue and Ray. During his childhood his family moved to the strip mine two miles outside of Zap, North Dakota. His father worked as a blacksmith for the coal mines. His parents both passed away at a young age, leaving him orphaned at 14 years old. Ed continued to live in Zap, North Dakota with his brother. Ed was part of the 1941-1942 Zap High School basketball team that took the district championship. During his sophomore year in school, Ed decided he was done with school. Ed left town with a few of his buddies to Portland, Oregon.

Upon arrival in Oregon, jobs were easy to come by as World War II had already started. During the next few years, Ed held a variety of jobs. Ed decided the work he was doing wasn’t how he wanted to live. So, Ed went down to the Post Office where the recruiting office was located. Ed had two choices: Navy or Marines. While trying to decide, a Navy officer came out to try and convince him to join the Navy. Ed did not like what he was saying, plus he wasn’t fond of the idea of having to swim out in the ocean, so Ed turn and walked into the Marine office.

Ed claimed he was 17 years old, however; he was only 16 years old. Ed’s older sister Anna to write a letter saying he was actually 17 so he could join the Marines. Ed was sent to Camp Pendleton for training. He was trained as a machine gunner. Ed landed on the island of Peleliu in the Palau Island on September 15, 1944. Ed was with the U.S. Marines of the 1st Marine Division, as part of the Operation Statement II. Ed and his fellow Marines fought on the island for six days in the Battle of Peleliu. Ed’s company was hit with shells and Ed tended to a fellow Marine that was injured. Ed was later praised for the work he had done on his fellow Marine. If it were not for Ed, that man would have lost his leg.

When Ed left the island of Peleliu he was one of 35 men out of the 289 in his company to make it. Ed was sent to Okinawa after the battle of Peleliu. He fought there for a month before he was hit in the ankle by shrapnel and transported to a hospital in Guam. From Guam, Ed was sent to the Philippines. Before Ed could be sent back to fight, the Japanese had surrendered. As a result, Ed was sent to China to accept the surrender of the Japanese army.

Upon returning to North Dakota, Ed went to his hometown of Zap. Ed decided he didn’t want to work in the coal mines, so moved to Bismarck. After working a few jobs, Ed found a trade school for electrician in Wilmington, North Dakota. It was a two year program. During this time, Ed meet his first wife, Mayme Johnson, and got married by a Justice of the Peace. Once finished with school, they lived in Bismarck and Ed worked as an electrician wiring old farms. In 1951, after a long cold winter, Ed moved his family from Zap, North Dakota to San Bernardino, California.

After a while in San Bernardino, Ed decided to get his contractor’s license and open his own shop. His first business was Loma Linda Electric, then switched it years later to Busch Construction & Electric. Ed’s second wife Nancy, convinced Ed to shorten his last name from Buschbacher to Busch.

Ed found his way to Ukiah in 1973 and moved his Busch Construction and Electric business to Ukiah. In 1978, Ed married the love of his life, Marilyn Nelson Busch. Ed and Marilyn made a life in the Ukiah Valley. Ed was an active member of the Seventh Day Adventist Church, a part of the Humane Society, and a ton of other charities and organization. Ed has been known for many years rescuing and feeding feral cats all over the Ukiah Valley as well as getting them spayed or neutered.

During his time as Founder/Owner of Busch Construction and Electric he was a great teacher to his employees. Many have gone on to open their own businesses in the community and have credited Ed with helping start and mentoring them along the way. His work will be forever cemented in the community. Ed’s youngest son, Korla Buschbacher, took over his business in 1995 and runs it with his two sons today.

A Celebration of Life Service will be held on Wednesday, June 24 at 1:00 p.m. at Seventh Day Adventist Church in Ukiah. 1390 Laurel Avenue. The service will also be lived stream: https://www.ukiahsda.com/watchlive/

In lieu of flowers, please consider a donation to the Humane Society for Inland Mendocino County in the name of Ed Busch.

To order memorial trees or send flowers to the family in memory of Busch, Ed, please visit our flower store.