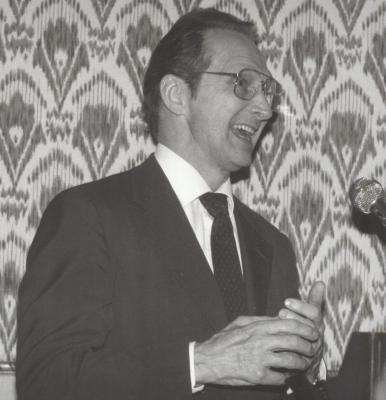 A colleague once said of Jim, “He is the most honest man I’ve ever known.” He had two great passions in life – his family and his unwavering belief that the Public School System is the best hope for the welfare of our country’s children.

Jim was born in Jersey City, N.J., to Michael and Kathryn Connerton. He was the second of four children, raised by loving, hard-working parents, and was a product of the New Jersey Public Schools. His college years were interrupted by WWII. He served four years in the Naval Air Corps. In 1944, he was commissioned a pilot-navigator, and married June Zabelle Boyajian.

After the war he returned to earn his B.A. degree at Montclair State Teachers College. At 23, he began his career in education as a teacher of American History and wrestling coach at Bound Brook High School, N.J. Only five years older than his high school seniors, he quickly became a favorite with students and athletes, who recognized him as a mentor, enjoying his sharp wit and lively humor. While teaching he earned his Masters of Arts and Doctor of Education degrees at Rutgers University under the G.I. Bill of Rights. His students immediately dubbed him “Doc.”

He left classroom teaching in 1956 to join the staff of the New Jersey Education Association as a field representative, serving teachers throughout the state in their efforts to further student welfare and teachers’ rights. He moved his family from New Jersey to Minnesota in 1969 to serve as Regional Director of the National Education Association in St. Paul. In 1979 he was recalled to New Jersey and named Executive Director of the N.J. Education Association, a position he held for 13 years, earning the respect and affection of his large staff and the state’s teachers. He fought the good fight for teachers’ rights and better schools against tough odds, and was sometimes known as “Mad Dog Connerton” for his spirited, outspoken stance on education issues.


In 1991 he began an active retirement at his home in Princeton, N.J., where he served as Chairman of the Construction Appeals Board and as a District Chairman for the local Democratic Party Association.

In 2008, his failing health caused a move for him and June to Ukiah, Ca., to accept a loving offer from his eldest son and daughter-in-law Carol, to help in his care.

He is survived by June, his wife of 71 years, sons Jamie, Jeff, and John, daughter Martha, brother Paul, 5 grandchildren, 2 step-granddaughters, and 5 great grandchildren. He goes to join the spirit of Josh, his deceased grandson. Godspeed, Jim.

To order memorial trees or send flowers to the family in memory of Connerton, James Paul, please visit our flower store.