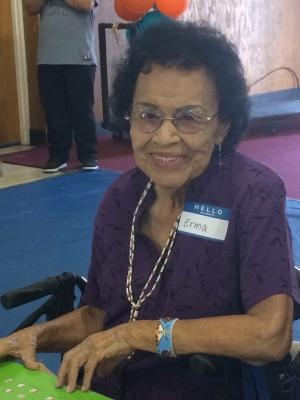 Obituary:
Erma Crabtree “Mom” “Mom Mom” passed away peacefully at her home on November 10, 2017, at the age of 97. She was born in Covelo, CA on the Round Valley Indian Reservation on August 10, 1920. She attended school in Covelo and graduated from Round Valley High School in 1938.
Erma graduated from the Ukiah School of Vocational Nursing in 1966 and was a LVN at Hillside and Adventist Hospitals for 20 years. “Mom” was proud of her family and always supported them. She was always surrounded by her kids, grand kids, great-grand kids, great-great grand kids, and all their friends.
“Mom Mom” will be remembered for her beautiful smile, and the generosity to all the young athletes in the community for over 70 years. She was the one who was always sitting in the same place at all the youth, high school, and college games cheering on all the local teams and players. There was never a time when she was at a game that kids, parents, and grandparents wouldn’t stop to say hello or to give her a hug.
Erma is survived by her sister Vera Smith and Brother-in-Law Francis Crabtree. Her daughter Carol Day and her husband Doug, son’s Ray Crabtree, Roy Crabtree and wife Sherie. Grandchildren Mary Ramos, Donna Campigli, Darin Day, Lisa Day, James, Christina, Carrie, and Daniel Crabtree, Ronny, Michael, and Tammy Higgins, Rhonda Klein and Michelle McInerney. Numerous great grandchildren and great-great children, and also numerous nieces and nephews. She was preceded in death by her daughters Janice and Phyllis Crabtree and Marilyn Higgins. Grandson’s Jonny and Troy Crabtree, sisters Aura Cordova, Loraine Treppa and brother Filbert Anderson. Father Levi Anderson, mother Aura Want and step-father George Want.
There will a viewing on Thursday, November 16, 2017, at Coyote Valley Gymnasium at 4pm. Funeral services will be on Friday, November 17, 2017, at Coyote Valley Gymnasium at 10am, burial to follow at 1pm at Russian River Cemetery. In lieu of flowers, donations can be made to Ukiah Babe Ruth. If there are any questions
contact Dave Kessler (707)354-6666.


To order memorial trees or send flowers to the family in memory of Crabtree, Erma, please visit our flower store.