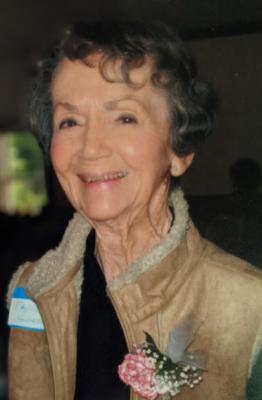 Obituary:
The Celebration of Life for Phyllis has been postponed to a later date. Time and place will be announced when rescheduled. Phyllis passed away at her home on Thursday, July 15, 2021 with her family by her side.

Born in Hollywood in 1924, Phyllis attended Hollywood High and graduated from UC Berkeley with a degree in Social Welfare. She fell in love with her husband Hugh P. Curtis in 1946. While Hugh finished medical school in San Francisco, Phyllis supported them, teaching preschool in Chinatown and the Filmore District.

Fueled by their desire to start a family, Hugh joined the army as a surgeon. This took them to Arkansas, where their oldest daughter Robin was born, and then to Germany, where their youngest daughter Kim was born. Phyllis always spoke of their time in Europe as a grand adventure and a profound opening of her world.

Searching for a place to settle, Hugh and Phyl came upon the Ukiah valley one fall afternoon. This began a lifelong love affair with the community and the land. Together, they worked tirelessly to build the medical community in Ukiah. Phyllis threw dinner parties to entice physicians and their wives to move to Ukiah. While raising her two children, she led Brownies and Girl Scouts troupes. Later, she was employed by the program for gifted children.

Phyllis and Hugh loved to hike, and they explored every inch of Mendocino County. Phyllis studied the trees and the wildflowers, and in her 70s started the Inland Mendocino Land Trust to help protect agricultural and public lands. She co-founded the Shade Brigade which organized tree plantings along Ukiah’s thoroughfares. Her environmental work was recognized by the 2009 Annual Women’s History Gala as a Woman Taking the Lead to Save Our Planet, and a bench in her honor was recently placed at the new Public Preserve at Pelican Bluff.

Texture, color, and beauty were very important to Phyllis. An avid singer, dancer, weaver, and crafter, she brought vibrant energy to every space she entered. Each week for 10 years, Phyllis created bouquets for the tables at Ploughshares, and for years sang in the Presbyterian Choir (though she always snuck out after the choir had sung to hike with her family). Set up on a blind date after her husband Hugh died, Phyllis found love again, and she and Harry Bistrin tore up the dance floor in their late 80s.

Phyllis also served on the board of Project Sanctuary for seven years, served on the Citizen’s Planning Commission, and worked to support the launch of the Mendocino Community College. In her 90s, she returned to a love of teaching young children, and volunteered as a literacy tutor in Calpella.

Phyllis’s devotion to the community of land and people was fierce and it touched many.

She is survived by her daughters, Robin Curtis of Santa Rosa and Kim Curtis of Flagstaff, Arizona, and by her grandchildren, Marianna ColesCurtis and Miles ColesCurtis.

To order memorial trees or send flowers to the family in memory of Curtis, Phyllis Mae, please visit our flower store.