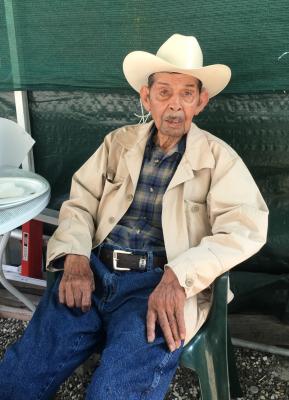 Obituary:
Francisco “Pancho” Damian Garcia
Mr. Pancho Damian, son of Felipe Damian Manzo and Mercedes Garcia Pulido, was born on August 26, 1922 in the small village of San Juanico, Michoacán, Mexico. He was the oldest of ten siblings. Pancho enjoyed a long marriage of nearly 75 years to the love of his life, Maria Cardenas, who passed away in 2017 in Ukiah, CA. Together they shared six children and a large extended family.
Pancho’s life changed dramatically in 1942 when he entered the United States as part of the Bracero Program which was an agreement developed between the United States and Mexico aimed to help with agricultural labor shortages brought about by World War II. (A Bracero is a farmer who works with his arms/hands.) As a migrant worker he moved from one region to another, usually on a seasonal basis. The pay was modest, the days were long and the work was backbreaking. Still, he was full of dignity and grateful his host country offered an opportunity to better the lives of his children.
The same year Neil Armstrong landed on the moon, 1969, Pancho landed in the Ukiah area. He would work in the fields attending to the variety of crops that grew at the time. For a short period of time, he worked developing residential properties around Lake Pillsbury for the actor Jack Haley who played the Tin Man in “The Wizard of Oz” and actor Jackie Gleason from the television series “The Honeymooners”. Though he had difficulty understanding the English language, he had a passion for watching western movies and television series such as “Bonanza”.
In addition to his strong work ethic and love for family, Pancho was known for his joy of dancing, his warm smile, his appreciation for a good drink and his delicious homemade carnitas. Needless to say, he was often the life of the party!
On August 22, 2019, at nearly ninety-seven years of age, Pancho passed away peacefully. He is survived by his large family including many of his siblings; six children (Filiberto, Benjamin, Valentin, Ofelia, Angelita and Antonia); 31 grandchildren; 73 great-grandchildren and a handful of great-great grandchildren. Pancho also left a community of extended family members, neighbors and friends who will remember him fondly.
A viewing will be held at Eversole Mortuary on Thursday, August 29th from 4-6PM followed by a Rosary service at 6 PM. The funeral mass will be held at Saint Mary’s Church in Ukiah on Friday, August 30th at noon.


To order memorial trees or send flowers to the family in memory of Damian Garcia, Francisco, please visit our flower store.