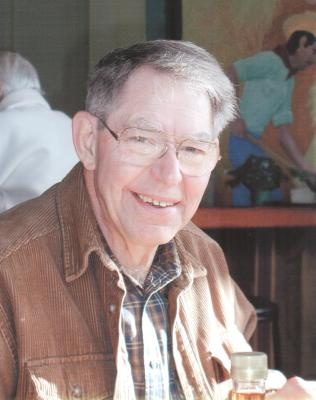 Obituary:
John W. (Jack) Daniels
John W. (Jack) Daniels, 87, passed away peacefully in the comfort of his home on Saturday, November 11, 2017. He is survived by Barbara, his wife of 60 years, and by his son John Daniels (Kerri), his daughters Christine Shuken and Amy Moore (Steve), and his seven grandchildren: Sarah, Scott and Steven Shuken; Jack and Holly Moore; and Haley and Johnny Daniels.
Jack had a personality that was larger than life and a sense of humor to match. Born and raised in Freeport, Illinois, he was a small-town boy with a big appetite for adventure. After high school, Jack enlisted in the U.S. Navy and was thrilled to travel the world during his tenure as a Radioman First Class. He later attended the University of Illinois, Champagne-Urbana, where he met Barbara Dostal, an art student from Chicago, Illinois.
Jack and Barbara were married on November 24, 1956. They made their home in suburban Chicago, where all three of their children were born. Jack’s career in accounting and management included 20 years with Masonite Corporation, who transferred Jack and his family to Ukiah, California, in 1979. In 1982, Jack made a career shift to the public sector, accepting the job of Associate Superintendent of Business Services for Ukiah Unified School District, where he remained until his retirement.
Jack shared his time and expertise with several community organizations, serving on boards for, Mendo Lake Credit Union, Mendocino College Foundation, Mendocino County Office of Education, Plowshares Peace and Justice Center and the Ukiah Community Concert Association. In addition to being a respected advisor, Jack was valued for his candor and his ever-present good humor. He always had a joke and a smile to share, and his colleagues quickly became his friends. He especially enjoyed cooking for the Plowshares Community Kitchen, where he volunteered every week for the last 19 years.
There are many ways to characterize Jack Daniels: gregarious jokester, savvy businessman, compassionate volunteer, loyal friend, book worm, sports fan, history buff. But above all, Jack was a family man. He adored his wife, with whom he shared a passion for skiing, travel, playing cards, music, theater, food, wine, friends and fun. Jack cherished his children and grandchildren, who often filled his home with love and laughter.
He will be greatly missed.
In honor of Jack’s life, a celebratory mass will be held at St. Mary of the Angels Church in Ukiah, California, at 10am on Saturday, November 18, 2017, followed by a gathering at St. Mary’s parish hall.
The family deeply thanks Phoenix Hospice for their kind and attentive care.


To order memorial trees or send flowers to the family in memory of Daniels, John W. "Jack", please visit our flower store.