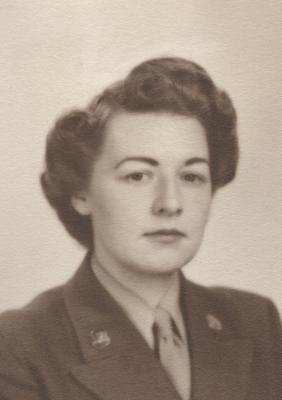 It was fitting that the heavens, filled with extraordinary shooting stars, paid tribute to receiving our beautiful mom and nana on the evening she passed away, Tuesday, August 11, 2015, in Cloverdale.
Marjorie Jane (McNeill) Dogali was born on May 10, 1920, in Arcata, California, to Mary Rose (Flower) and William Iles McNeill.
After graduating from Hopland High School, she worked as a civilian postal clerk, before joining the Women’s Army Corps on October 4, 1943. She was the beloved wife of George P. Dogali for sixty years before he entered into rest on July 20, 2005. George and Marjorie met in 1942, a year after George entered the Army. They had a long distance courtship and on furlough were married May 17, 1945, at Saint Peter’s Catholic Church in Cloverdale.
Marjorie was the last surviving child of her parents’ four children. She was predeceased by her brother, Dorman McNeill, and sisters, Mina Brown and Irene Pruett.
She leaves to mourn her passing one daughter, Donna J. Buchignani, and two sons, Gary P. Dogali and George I. Dogali. She leaves seven grandchildren, as well: Anthony, Deno, Gina, Mario, Dana, Paul and Gino. Two great-grandchildren survive her, also: Henry and Fern.
Marjorie was the Charter President of the Ladies Auxiliary to Ray Zittleman Post #9268, Veterans of Foreign Wars. Additionally, she belonged to Druids, and, also, to WIMSA (Women In The Military Service Association).
A Funeral Mass for Marjorie Dogali of Pine Mountain, will be held on Monday, August 24th, at Saint Peter’s Catholic Church in Cloverdale. The Mass will begin at 11:00 a.m. (Visitation 10:00 a.m.) Officiating will be Father Sean Rogers and Deacon Harry Martin.
Memorial contributions in her memory, if desired, would be appreciatively received by the Willow Creek-China Flat Museum, P.O. Box 102, Willow Creek, CA 95573.
Eversole Mortuary is in charge of arrangements.

To order memorial trees or send flowers to the family in memory of Dogali, Marjorie Jane, please visit our flower store.