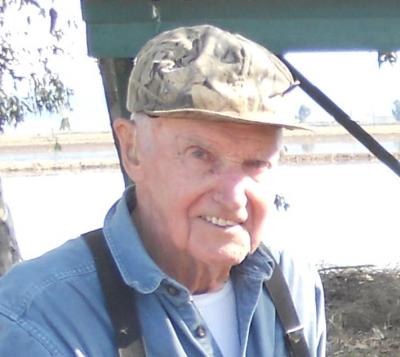 Obituary:
Funeral services for Pete Dunnebeck of Ukiah who passed away on Friday, August 22, 2014 will be held on Friday, August 29, 2014 at 11:00 AM at Eversole Mortuary. Interment will be in Hartley Cemetery in Lakeport.
Born September 23, 1927 in Lakeport, Pete served his country in the US Army. He was a retired businessman, owning ACME Rigging for 42 years. He was a member of the Rocky Mountain Elk Foundation, Mule Deer Foundation, Ducks Unlimited and Ukiah Elks Lodge.
Pete was happiest enjoying the outdoors whether it be hunting, fishing or traveling. He spent his last moments hunting alongside his good friend, Floyd Ross. A friend to all, he went through life with a twinkle in his eye and a smile that lit up the room. A loyal friend and devoted companion, Pete also enjoyed the company of his dogs that he loved to spoil.
Pete was preceded in death by his wife Eva, siblings Calvin "Buck," Frank, Edna and Clare. He is survived by his older brother Wayne (Ann), numerous nieces and nephews, companion Anita Mae and many longtime friends. His memory will live on in their hearts forever.
Arrangements are under the direction of Eversole Mortuary.

To order memorial trees or send flowers to the family in memory of Dunnebeck, Pete, please visit our flower store.