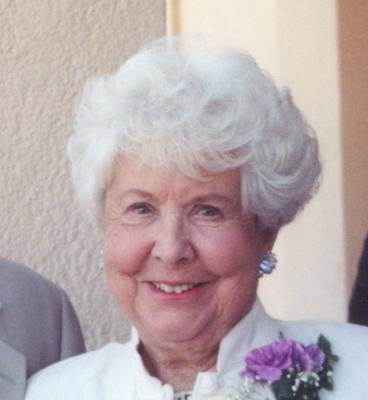 Obituary:
Barbara Eversole was born December 25, 1926 in Ukiah, California (4th generation) to Clarence and Alta Ballou. Alta was County Recorder for Mendocino County for 20 years. She attended schools in Ukiah graduating from High School in 1944, having been active in student activities, participated in school plays, was a member of the High School Band and a class officer. She graduated from Armstrong Business College as a private secretary in 1945. Barbara married Walter Eversole in 1945. She worked as secretary to the Mendocino County Farm Advisor for 1 ½ years and then as secretary to the administrator of the United States Veteran’s Administration Contact Office in Ukiah until it closed in 1948. She became as Outside Sales Person at Redwood Travel in 1986 and traveled to most of the world, taking groups a good part of the time.
Barbara was an avid gardener and has been very active in the community and state during her lifetime. She was instrumental in starting Ukiah Coop Nursery School, worked on fundraising drives for Red Cross, Heart, Crippled Children and many others. She studied landscape design in a comprehensive two-year course and became a Nationally Accredited Landscape Design Critic, serving as a judge for garden contests and giving landscape design awards throughout the northern district of the State of California. She conducted a hobby-business designing gardens in the Ukiah area – Bank of America, Masonite Corporation, Eversole Mortuary, Veterans Memorial Building, Ukiah Cemetery, Library Park (which won a national award for the Ukiah Garden Club) as well as many other businesses, apartments and homes. Barbara was instrumental in the construction and beautification of McGarvey Park, having headed the fund-raising efforts and supervised the installation of plantings, paths, utilities, fountain, benches, etc. She designed and supervised the construction of Hudson-Carpenter Park and worked on the Chamber of Commerce committee for the revitalization of downtown Ukiah.
She was appointed by the City of Ukiah to serve on the Design Review Board for the Ukiah Redevelopment Agency in 1992 and appointed to the Twelfth District Fair of Directors by Governor Pete Wilson in 1992.
Barbara served as president of a chapter of Beta Sigma Phi and was named “Girl of the Year” in 1958, served on the Mendocino County Grand Jury for 1 ½ years and was secretary, served as Chairman of the Cultural Arts Commission for the City of Ukiah and was instrumental in establishing the Sun House Guild, which raised all the money to design and construct the Grace Hudson Museum. She was the grant-writer for the Sun House Guild, which raised over $750,000 from the private sector to establish, design and contract the Grace Hudson Museum. She also served as chairman, Board of Trustees, Sun House Guild for two terms and served as president of the Sun House Guild for two terms.
Barbara was the recipient of numerous awards including: an award from the City of Ukiah for the Beautification of McGarvey Park, California Parks and Recreation Award for the year 1978, recognition for Outstanding Historical Preservation by the Mendocino County Historical Society and the City of Ukiah in 1981, named “Woman of Achievement” Soroptimist International in 1981, named “Outstanding Citizen of the Year” in 1984 by the Greater Ukiah Chamber of Commerce, named “Outstanding Volunteer of the Year” in 1984 by the Sun House Guild, awarded a Resolution by the State of California for work on the Sun House Project in 1985.
Barbara was a Life Member of Kingsley Chapter of Order of Eastern Star, member of Ukiah Garden Club serving as its president for the year 1972, member of the Ukiah Emblem Club where she served on many committees, member of the Citizens Advisory Board of the California Conservation Corps in the Mendocino Service District, former member of Cultus Club serving as president for the year 1975 and former member of the Children’s Home Society.
Barbara is survived by her son Ronald Eversole and wife Jane, and their children Jill and Ben Eversole, son Richard Eversole and wife Donna, and their children, son Edward Eversole and wife Chrissy and their children Grace and Lillie Eversole, daughter Heather Moore and husband Rick, and their children Colten and Casey Kinney and Beau Thurston.
Funeral Services will be held on Friday, September 16, 2016 at 11 a.m. at Eversole Mortuary with a reception to follow at the Ukiah Elks Lodge. Visitation will be on Thursday, September 15, 2016 from noon to 8 p.m. at the mortuary. Inurment will be at Evergreen Memorial Gardens.
Memorial contributions may be made to the Grace Hudson Museum 431 S. Main St. Ukiah, CA 95482 or Hospice of Ukiah P.O. Box 753 Ukiah, CA 95482.

To order memorial trees or send flowers to the family in memory of Eversole, Barbara Louise, please visit our flower store.