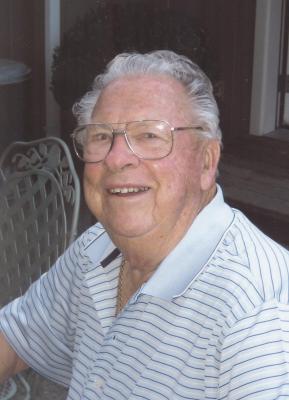 Obituary:
Walter R. Eversole was born May 25, 1923 in Ukiah, California. He attended school in Ukiah, and after graduating from High School, attended Santa Rosa Junior college and the San Francisco College of Mortuary Science, graduating in 1943. At that time he entered the Army Air Force and was a navigator on a B-24 in the South Pacific with the 5th Air Force. Upon his discharge in 1945 he returned to Ukiah and married Barbara Ballou. Walter entered into business with his father, E.A. Eversole, at the Eversole Mortuary becoming the third generation of Eversoles to own and operate the family business.
Walter has been very active in the community and state during his lifetime. Some of his accomplishments are as follows: Past Master Councilor of DeMolay, Past President of Ukiah 20-30 Club, Past District Governor for 20-30 International, Past President of Ukiah Rotary Club, Past Exhalted Ruler of Ukiah Elks #1728, Past Patron of the Order of Eastern Star Kingsley Chapter #58, Past District Chairman for the Yokayo District of Boy Scouts of America, Past Vice President of the Sonoma-Mendocino Council Boy Scouts of America, Bearer of the Silver Beaver Award Boy Scouts of America, Past President Redwood Empire Funeral Directors Association (two terms), Past President California Funeral Directors Association, served on the City of Ukiah Planning Commission, Ukiah Airport Commission, Board of Directors Savings Bank of Mendocino County and on the Board of Directors for the Ukiah Chamber of Commerce.
Walter is a member of the following organizations: Masonic Lodge, Aahmes Temple of the Shrine, Veterans of Foreign Wars, American Legion, Ukiah Men’s Golf Club, BPOE #1728, Ukiah Rotary Club and Order of Eastern Star #58.
Walter presently serves on the Senior Board of the Savings Bank of Mendocino County.
Walter, along with two others, hung all the wallpaper in the Grace Hudson Museum. He also reconstructed all the fencing in front of the Sun House.
Walter enjoyed woodworking and has made many beautiful pieces of furniture for the Eversole Mortuary and his home, as well as altar tables for some of the local churches.
Walter has constructed much time, effort and money to the many charities in the community during the past years he has been in business.
Walter is survived by his wife of over 70 years, Barbara Eversole, son Ronald Eversole and wife Jane, and their children Jill and Ben Eversole, son Richard Eversole and wife Donna, and their children, son Edward Eversole and wife Chrissy and their children Grace and Lillie Eversole, daughter Heather Moore and husband Rick, and their children Colten and Casey Kinney and Beau Thurston.
Funeral Services will be held on Saturday, August 20, 2016 at 11 a.m. at Eversole Mortuary with a reception to follow at the Ukiah Elks Lodge. Inurment will be at Evergreen Memorial Gardens.
Memorial contributions may be made to the Grace Hudson Museum 431 S. Main St. Ukiah, CA 95482 or Hospice of Ukiah P.O. Box 753 Ukiah, CA 95482.


To order memorial trees or send flowers to the family in memory of Eversole, Walter Robert, please visit our flower store.