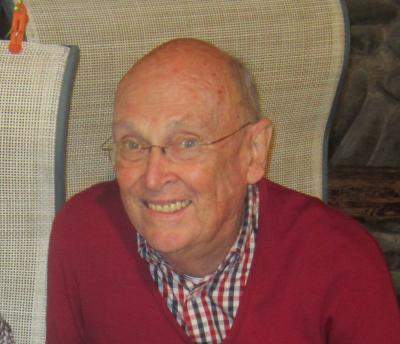 Bryan Fairlee passed away peacefully in Fort Bragg, California on October 30, 2019. He was 95 years old.
Bryan was born in Yuba City, California to Vera (Bryan) Fairlee and Earl Fairlee. He spent his childhood in Yuba City and helped out at the family business and took over as “man of the house” taking care of his sister, LauraLu, and his mother after his father passed away in 1939.
Bryan served in the Army during World War II, as a medic in the Pacific from 1942-1945. He was proud of his service and felt it helped strengthen him as an adult. After the war, he married his high school sweet-heart, Marjorie Duffy, in 1947. They moved to Fort Bragg in 1950, where he owned and ran the Cannarr-Fairlee Funeral Home until his retirement in 1986. After his retirement he became a
chaplain and delighted in presiding over more than 100 wedding ceremonies. He loved living in Fort Bragg and was very active over the years in many civic endeavors. Throughout his life he was a member of the Episcopal Church, and was a member of St. Michael’s Episcopal Church in Fort Bragg from 1950 until his passing. He was a member and president of the American Legion. Bryan was a long standing member of the Fort Bragg Rotary Club, holding the office of President in Fort Bragg, as well as being the Northern California District Governor. He also was the organizer of the Paul Bunyan Parade for many years and was honored as the Grand Marshall the parade in 2010. He also loved acting in many of the Footlighters productions over the years. Throughout their life together, he and his wife, Marge, traveled to over 30 countries in the world and cherished the memories of these trips.
Bryan was preceded in death by his parents, his sister, his wife, Marge, and his eldest daughter, Cathryn. He is survived by his daughter, Jill (Randy) Swanson, his son, Duff Fairlee (Tonya Miller), two granddaughters – Trisha and Dana, and two grandsons, Ricky and Joshua Miller. He is also survived by four great-granddaughters – Morgan, Alyssa, Leyla and Farren and two great-grandsons, Remington and Maverick (aka Cactus).
Funeral services for Bryan Fairlee will be handled by Eversole Mortuary wwweversolefs.com. The service will be on November 14, 2019 at 11:00 a.m. at St. Michael’s Episcopal Church located at 212 E. Fir Street, Fort Bragg, CA.
In lieu of flowers, memorial contributions can be made to The Mendocino Coast Children’s Fund, or a charity of your choice.


To order memorial trees or send flowers to the family in memory of Fairlee, Bryan, please visit our flower store.