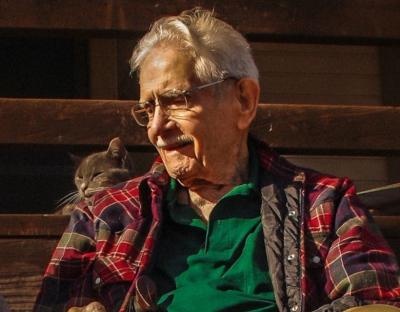 Obituary:
Graveside services for Louis Gordon Feigin of Ukiah will be held on Friday, December 15, 2017 at 1 pm at Ukiah Cemetery.
Born November 15, 1919 in Flint, Michigan, Louis passed away on Saturday, December 9, 2017, at Holy Child Care Home with his family by his side. Louis graduated high school and has resided in the Ukiah area for the past 67 years. Louis enlisted in the service but they wouldn’t take him so he went to work for Hall-Scott in Oakland building PT boat engines, 7 days a week, 12 hours a day for 2 years. He worked as a machinist and owned a successful business, Ukiah Automotive Machine Shop, for 30 years. He received his pilot’s license in the mid 1950’s. He was very active wood turning, working outdoors, farming and taking care of the ranch. He will be remembered for his sense of humor and his woodturning bowls. He married the love of his life, Willa on February 7, 1942 and loved her fiercely. She lost her sight in 1981 and he devoted himself to her. He liked to say sky blue pink was his favorite color. He was very proud of helping raise his two grandchildren. His favorite quote was “Damn if you know, I don’t.”
Louis is survived by his son Rick Louis Feigin and wife Kathy of Ukiah, grandchildren Keith James Feigin and wife Kate of Ukiah, Taylor Heidi Fowler and husband Chris of Cameron Park, great grandchildren Linnea Feigin (8), Will Feigin (5), Casen Fowler (2), nephews Richard Caldwell and wife Laura of Lake Havasu, Wes Caldwell and wife Tootsie of Windsor and Jerry Hill, nieces Myrna Rountree of Covelo and Sherri Butcher. He was preceded in death by his wife Willa Nadine Feigin, parents Sam and Ingrid Feigin and his sister Lil Hill.
Memorial contributions to Phoenix Hospice 100 San Hedrin Circle Willits, CA 95490 are preferred.


To order memorial trees or send flowers to the family in memory of Feigin, Louis Gordon, please visit our flower store.