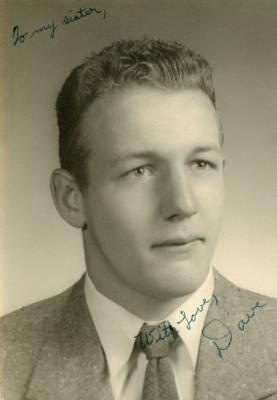 Obituary:
David Willis Freeman passed away peacefully in his Ukiah, CA home on Sunday, November 4,
2018, surrounded by his wife of fifty-nine years, Janet Freeman, and two daughters, Alison
Freeman (Gardelius) and Jennifer Freeman (Gelphman). After several years of physical
suffering he is finally at peace. Along with his wife and daughters, Dave leaves behind three
grandchildren, Shelby Gardelius, Zane Gelphman, and Willow Gelphman.
Dave was born on March 5, 1938. He was raised in South San Francisco, CA where he
graduated from South San Francisco High School in 1956. As a four-sport athlete, Dave still
holds the school record for the most varsity sports played by an individual. After high school,
Dave spent two years in the United States Navy. When he returned, he attended the College of
San Mateo, where he was a star of the golf team, coming in third place in state competition.
Dave continued his education at San Francisco State University, where he earned a Bachelor of
Science degree in Physical Education along with a teaching credential. He then spent nearly
three decades teaching P.E. and math as well as coaching basketball and track and field to
thousands of middle schoolers. In fact, a parent of one of his former students stated the
following: “Dave was very special to me and was our son’s favorite teacher! He taught at
Southwood Jr. High when our son was an eighth grader. He hated school except for Dave’s
class.”
Dave enjoyed spending his leisure time square dancing, hiking, refinishing furniture, and finding
treasures at thrift stores and garage sales; however, his favorite activity was golfing. He was
frequently recruited by friends to be part of their foursome in tournaments because they knew
that their chances of winning would greatly increase.
Family, friends, and acquaintances will most remember Dave’s kindness, sociability, and
integrity. As a close friend stated, “Dave was the greatest: great sense of humor; great athlete;
an all-around great person to know; and he had that happy-go-lucky smile...A major loss to our
group.”
A celebration of life will take place at the San Mateo American Legion Hall, 130 South Blvd. San
Mateo, CA 94402, on Saturday, November 24, 2018 from 2:00-5:00 p.m. In lieu of flowers, the
family asks that donations be made in Dave’s name to the South San Francisco High School
Booster Club (650-877-8754).

To order memorial trees or send flowers to the family in memory of Freeman, David Willis, please visit our flower store.