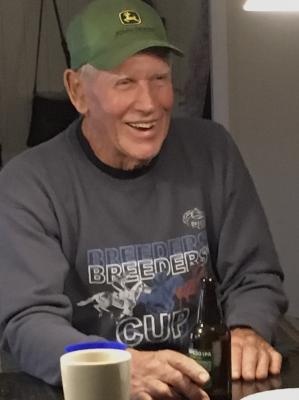 Obituary:
Sherwood was born on 26 June 1935 in Oakland, California, married in San Rafael, California, and spent the last 30 years of his life in Redwood Valley, California.
Sherwood was a very friendly, warm hearted man; loved by all he met. His favorite quote from actor comedian Will Rogers "I never met a man I didn't like" was truly his life. He was a plant loving nursery man and a horseman. After high school he enlisted in the US Air Force as a radar technician. Then enrolled in college to study horticulture. Upon completion of his studies he became a partner at the plant Nursery in Fairfax, California and met and married his wife of nearly 58 years Belva Ann in 1962. After their marriage he soon bought out his partner and named the business Sherwood's Fairfax Nursery. As time moved on he and Belva started their family and grew to love horses; specifically race horses. In 1983 Sherwood bought an Appaloosa stallion to stand at stud. He enjoyed watching the stallion's progeny racing and winning on the Fair Circuit. This life opened many new opportunities and he and his family moved to Redwood Valley where they raised cattle and developed the land and rode his trail horses. In 2017, however, their home and property were caught in the raging Mendocino wild fire in which they lost everything. Sherwood and his wife didn't give up. They spent the last two years of his life rebuilding their home and ranch. Sadly now, a battle with cancer has taken his life.
He is survived by his wife Belva Frische of Redwood Valley, his son Dan (his spouse Angel Smith) Frische, three grandchildren Katherine Rose Frische, Stephanie Amber Frische and Hunter Dean Frische, and numerous nieces and nephews.
His love of life and humor will be missed.


To order memorial trees or send flowers to the family in memory of Frische, Sherwood Charles, please visit our flower store.