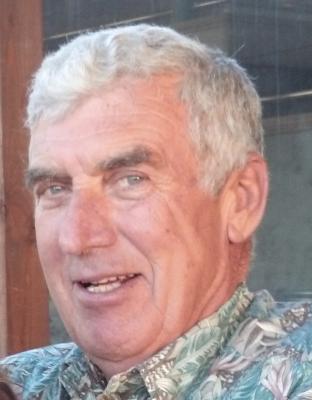 Obituary:
Theodore Michael Gearhart died peacefully at home in the arms of his loving wife on September 11, 2019. He was born in Forest Lake, Minnesota, to Grant Gearhart and Myrtle Gearhart, and was the youngest of four children.

Ted spent most of his childhood on a dairy farm in Wascott, Wisconsin. Every morning before school he would milk the cows, clean the equipment, deliver the milk to the train station, and prepare for school. Then after school he would do the whole process again. After this he had free time for fun, including exploring the wilderness near the farm. On the dairy farm, Ted got a 4-H blue ribbon for his Holstein calf, and throughout his life, he continued acquiring cow socks, shirts, plates, stuffed animals, games, jelly belly dispensers, ties, and Christmas sweaters from family and friends, to his amusement.

As a teenager, Ted’s grandfather would give him a single shotgun shell and he had to bring back a rabbit or bird or he wasn’t given another shell for a week, which taught him to be proficient. He was often hired by hunters from the big city who needed a little help tracking and retrieving their quarry. Ted loved the outdoors, and passed that love onto his children and grandchildren.

Ted was recognized easily, even later in life, by those who knew him, not only for his handsome looks but also for his charming presence and fun sense of humor. Ted was a strong, supportive, and capable provider for his family. He had many good friends, including some that he had known since childhood, and maintained these relationships throughout the years. His first love was farming, which he passed on to his children by showing them how to support the family with productive vegetable gardens. Ted returned to his gardening, as a viticulturist, in his retirement, and also found great joy in having more time to spend reading. In his youth, he read every book in his school’s library, and continued his passion for reading throughout his life. Charles Dickens remained his favorite author, for his complex plots and numerous characters, though his reading ranged throughout genres.

He was instructed by his father and grandfather in his first trade, carpentry, becoming a journeyman carpenter at age 18. He moved to Phoenix, AZ in his early 20’s where he met and married the love of his life, Barbara Ann Seele. She found him to be patient, kind, and loving to all, including her younger siblings even when they finger printed his beloved Oldsmobile. After the wedding, Ted and Barbara moved to Santa Rosa, CA where they started their family. They later relocated to Cloverdale where they purchased their first home and Ted began working as a millwright. Ted always enjoyed watching football when he could find the time. He learned to love baseball, sharing many happy hours with Barbara rooting for the Giants and the Cardinals.

The only meal he enjoyed cooking was tomato soup and grilled cheese sandwiches, though he always said he loved everything Barbara made. He loved cheese, especially sharp Wisconsin cheddar, and fresh cheese curds. His favorite beer was Lienenkugel’s. His favorite birthday treats were chocolate cake topped with butter, and rhubarb pie with vanilla ice cream.

Ted was an avid observer of nature and appreciated it in all its beauty and complexity. He was a strong believer in courtesy, honesty, kindness and did not tolerate serious misbehavior. He was known for his professional packing, skillfully fitting weeks’ worth of camping gear and his family of seven into the family van. Ted taught his children this skill as well as other skills they needed to maintain their own vehicles. He was a very patient teacher no matter what the situation. He loved traveling with his wife and kids, especially seeking out historic sites. The family traveled all over the USA and Canada, creating memories that will never be forgotten. Ted was always prepared for any handyman situation, carrying his “Old Timer” pocket knife and a thorough tool set with him everywhere. He would never leave the house without his “Lip Ivo” and a clean cotton handkerchief in his pocket.

Ted thought carefully about any challenge or problem then proceeded to fix or resolve it. He spent many hours working to support his family and, in his home, teaching his children woodworking skills, auto maintenance and repair, creativity and problem solving, and his strong work ethic. He was a believer in “measure twice and cut once”, and as a result rarely made a mistake. He believed that knowledge was useless without common sense, and impressed this on his children.

Ted was a wonderful father and grandfather. He was loved not only for his gentle teasing and bad jokes, but for sneaking candies to his grandchildren whenever they visited. Ted was a talented ice skater and enjoyed ice skating with the kids. He loved playing and teaching card games, checkers and chess to anyone, especially family, who were willing to play. He would never just let someone win; they had to get good enough at the game to beat him. When he wanted to kick back with his grandchildren, he enjoyed watching cartoons, especially his favorite, “Shawn the Sheep”. Over the last couple of years, his favorite entertainment was “Word’s with Friends”, which he won most of the time.

He was preceded in death by his mother Myrtle and her husband Ben, his father Grant, and Ted’s brothers Harold and Don.

He is survived by his loving wife Barbara, his five children: Teddy, Robert, Betsy, Doug, and Suzie, his grandchildren, his sister Lovetta, numerous nieces and nephews, and other relatives.

In lieu of flowers, donations to the American Cancer Society would be greatly appreciated.

To order memorial trees or send flowers to the family in memory of Gearhart, Theodore Michael, please visit our flower store.