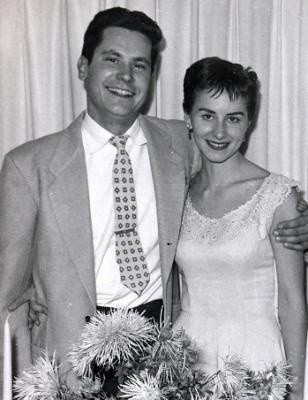 Obituary:
Gary Goodacre passed away February 4th 2021 in his Ukiah home at the age of 90.
Born in San Mateo, CA on May 9th 1930, Gary spent his childhood and youth there. After graduating from Serra High School in 1948, Gary served in the US Air Force from 1950 to 1954. Upon his return to San Mateo in December of 1954, he met his future wife, Virginia, on Christmas Eve. They were married January 14th 1956 in Belmont, CA.

Although he grew up a Stanford fan, Gary attended UC Berkeley ($0 tuition for CA residents!)
where he earned a degree in Forestry in 1959. The growing family moved to Ukiah in October of 1959 and Gary began his Forestry career at Masonite. It was at Masonite that Gary met Joe Scherf, and after a short stint at the US Forest Service, joined Joe in the Land Surveying business Joe started in 1963. He spent the remainder of his career with Joe, and short periods with the City of Ukiah and City of Santa Rosa.

Gary loved the outdoors, reading, useless trivia, and all things maps – drawing them, reading them, collecting them, and showing them to people who most often didn’t really care to see them! Gary and Virginia spent their retirement years traveling the western US, often ending up at a cabin in the wilderness where Gary would relax on the porch and Virginia would paint the scenery.

Gary was preceded in death by Virginia, his wife of 47 years in 2003, and his son Mark in 2020. He is survived by sons Matt and Guy, daughter Susan, and grandchildren Samantha, Lauren, Kelsey, Aaron, and Nicholas. He also had the great joy of spending time with his great-grandsons Taj and Silas Read. Much appreciation goes to Darla Land, his caregiver and friend for the last eight years.

We will miss his sharp mind and great stories, sharing his well-read perspective on growing up during the Great Depression and WW2.


To order memorial trees or send flowers to the family in memory of Goodacre, Garrett Roi, please visit our flower store.