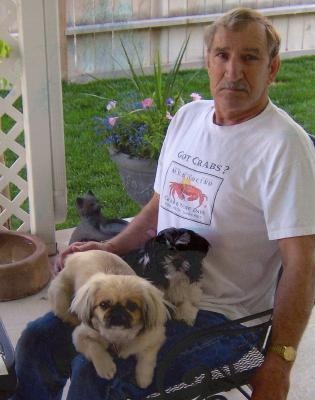 Obituary:
Raymond Vincent Graziano, passed away on October 21, 2021, at his home in Ukiah. Raymond was born March 29, 1944, in Ukiah where he lived his life.
Raymond was a retired heavy equipment loader operator.
Raymond received numerous awards and accolades throughout his racing career in his younger years. He will be remembered for his love of gardening and sharing his vegetables with family and friends and taking such good care of his two dogs Vinnie and Dolly.
He had a special quote for all his friends, he particularly liked “What a bunch of dumb S.O.Bs.”
Raymond is survived by his sister Diane Graziano, brother Eddie Graziano and numerous nieces and nephews. He was preceded in death by his mother and father Clara & Hugo Graziano and his sister Julie Winter.
A graveside service will be held on Monday, January 24, 2022 at 1:00 PM at Ukiah Cemetery.

To order memorial trees or send flowers to the family in memory of Graziano, Raymond Vincent, please visit our flower store.