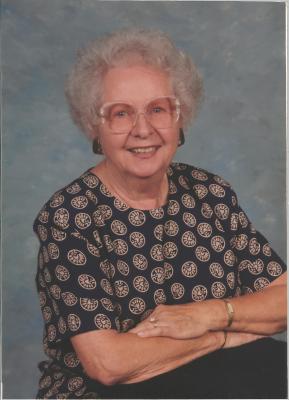 Dorathy was born March 2, 1919 in San Francisco to Richard Dennen & Zella (Scott) Dennen of Point Arena, California. The family later moved to Ukiah where they established a home on Church Street in one of Ukiah’s Westside neighborhood.

As a young teen Dorathy met ‘the boy next door’ and was soon to have been heard to say “I’m going to marry that boy one day”. That boy was Paul Lawrence Hansen, and as prophesized Dorathy married Paul in September of 1939. The two built their first home on Mill Street where they began their life together and started a family that would one day total forty-five; four children, thirteen grandchildren, twenty-seven great grandchildren and one great great grandchild.

Husband Paul was a butcher by trade and became the owner of Ward’s Meat Market; part of Ward’s & Wildberger’s Market on the corner of School & Standley Street in downtown Ukiah. Dorathy, a homemaker for many years, later, along with husband Paul, became the owners and proprietors of the Palace Dress Shop when they purchased the clothing store from Susie Cox in 1964; then located on the ground floor of the Palace Hotel. The store would later become the Palace Place Dress Shop & Bridal Salon and move to the Marks Building on the corner of State & Perkins Street.

Throughout her life Dorathy loved music and rarely passed up an opportunity to dance; especially Big Band Music, the music of her era.
A member of the First Presbyterian Church of Ukiah, Dorathy taught Sunday school in her younger years and was a member of a local sorority. Later in life Dorathy & Paul loved to travel, making frequent RV trips throughout the west. However, Dorathy’s greatest passion in life was family, and you didn’t necessarily have to be blood or marriage related in order to become a part of ‘her family’. Known to most as ‘Nana’ she was the proverbial ‘mother hen’ dishing out advice to all who sought it and to others who “never saw it coming”, but later cherished her words of wisdom. You were only a stranger once; within minutes of meeting her she would learn your life story and somehow make you freely divulge that story without you realizing she was extracting personal information you normally would not share otherwise. Dorathy was an eternal optimist; no doubt her Polly Anna attitude attributed to her longevity.

Funeral services will be held at Ukiah’s Eversole Mortuary on Monday, October 26, at 10:30 a.m., followed by interment at the Ukiah’s Russian River Cemetery on Low Gap Road; after which there will be a reception and a celebration of Dorathy’s life.

To order memorial trees or send flowers to the family in memory of Hansen, Dorathy Isabel, please visit our flower store.