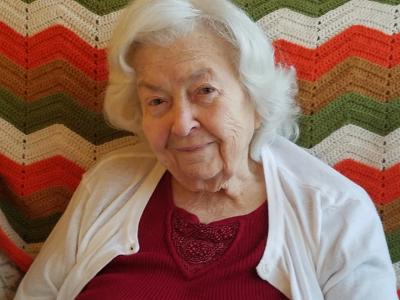 Born January 12, 1923 passed August 3, 2018. Parents were John and Regina Stolpe, immigrants from Finland. She was raised in Greenwood (Elk), CA and graduated from Mendocino High School. The family moved to Rockport, CA, where she worked in the cookhouse and met Eugene Hash, who came from Kansas to work in the woods. They eloped to Reno and got married September 23, 1941. They had two children, Lydia Jean Hash married Bob Kingsley and Ina Dale Hash married David Ford. During the war years Gene worked in the shipyards and they resided in Oakland. After the war, they moved to Concord, CA and in 1952 purchased the Foster’s Freeze in Petaluma, CA. In 1968 they sold the store and purchased a former dairy on I Street Ext. in Petaluma and proceeded to raise Shetland Ponies and continued operating the ice cream trucks. Subsequently, they opened Hash’s Saddle Shop at the residence raised Quarter Horses, and also sold horse Trailers. In 1999 they sold the property and moved to Redwood Valley . Gene passed in 2010 and Lydia continued living at the residence until she passed. Lydia is predeceased by her parents, her husband Gene, brother Runar John “Pie” Stolpe, sisters Elma Phillips, Sigrid Langford, Ina Rodgers, and Eleanor Sverko. She is survived by both daughters, grandsons Greg Crowder (Julie), Russell Ford (Andria) and Kirk Ford (Katie). Great Grandchildren Nate and Zack Crowder, Harper Ford and Beckett Ford. Graveside services will be Wednesday August 15, 2018 at 10:00 a.m. We would like to thank her friend Fran Keys for taking care of her for the last three years and Nance Brown for assisting. Also, doctors Portnoff, Coren, O’dorisio. Memorial contributions can be made to Redwood Valley Calpella Fire Department.

To order memorial trees or send flowers to the family in memory of Hash, Lydia Sophia, please visit our flower store.