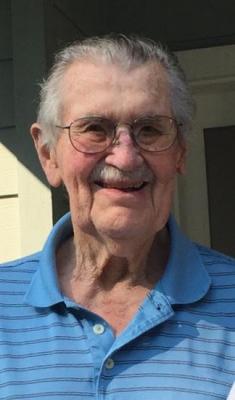 Obituary:
Eugene (Gene) Byron Hefte died peacefully on Friday, October 13, 2017, after suffering a stroke in Ukiah, CA, at the age of 85.
Byron was born on May 20, 1932, in Eureka, CA, to Bertha Nelson of Sweden and Arthur Hefte of Staples, Minnesota. They settled in Ukiah in 1940. Byron graduated from Ukiah High School in 1950, with a high aptitude in athletics, especially basketball, where he was recognized as the Most Valuable Defensive Player at the 1949 Cow Palace High School Basketball Tournament. He had many lifelong friends in Ukiah, Fort Bragg and Lake County, from the time he was in elementary school through his 40 years working for Wonder Bread.
An avid golfer, Byron played on many famous courses in the U.S. and abroad. He loved fishing and abalone diving. He was a veteran who served in the Korean War with the U.S. Air Force.
Byron is survived by his loving wife Faye, children Leslie (Warren) Henry, Eric Hefte, Colleen, Mark and Robin Fanning, sister Barbara Francis, niece Erika Francis, grandchildren Sarah Henry, Kelly Douglas, Christopher, Kevin, Cassandra and Kiley Hefte, Caitlin Fanning, and eight great grandchildren. Byron was preceded in death by his son, John Hefte. He will always be remembered as a caring, loving and patient man devoted to his family.
Please join our family for a Celebration of Life for Byron on Friday, October 20, 2017, 4 – 7pm at the Ukiah Golf Clubhouse. Memorial donations may be made in Eugene (Gene) Byron Hefte’s name to the Community Foundation of Mendocino County www.communityfound.org.
The family would like to thank the doctors and nurses at Ukiah Adventist Hospital for their exceptional support and care.

To order memorial trees or send flowers to the family in memory of Hefte, Eugene (Gene) Byron, please visit our flower store.