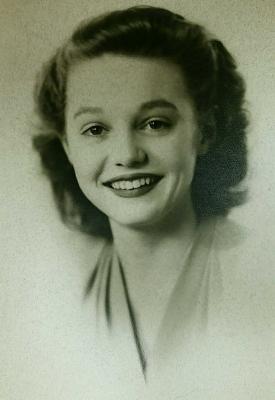 Obituary:
Shirley Ann (Willet) Heller, 86 yrs,
A resident of Ukiah, Shirley Heller passed away peacefully with her family, friends and dog by her side on April 24, 2017 at 2:15pm. Shirley was born on May 31, 1930 to Arlo and Dorcas (Haun) Willet of Shiloh, Ohio. Raised in Shelby, OH, she attended Miami University of Ohio before becoming an airline stewardess for American Airlines. While based out of S.F., she met a 23 yr old army G.I. from Youngstown, Ohio stationed at Ft. Baker. In 1954 she married Donald A. Heller in Sausalito, CA.
In 1959, while working for the Big S.F. Accounting firm, “Web and Web”, Don took the risk and accepted a position in the company’s most far away office – Ukiah! They moved with their two children, Mark and Mary Lou, to the Empire Gardens subdivision. Later, they would come to own the accounting business on the second floor of the Savings Bank building where Don worked until his untimely death in 1989.
One of his clients was a local partnership that would subdivide and create Deerwood Park, including “The Deerwood Swim Tennis Club”. Eventually, Don and Shirley became the sole owners of this recreational club which anchored their neighborhood. From 1962 to 1989, when the Deerwood Swim and Tennis club was sold, Shirley was involved in every aspect of its management and daily function. From cleaning to hosting social events and 4th of July parades, her involvement made Deerwood Park the greatest place ever to grow up. In addition, their other set of kids came along, Jonathan and Julianna, giving her four children to raise with a 10 year age span. Shirley was a woman of many interests and talents. A substitute teacher, furniture refinisher, wind chime maker, and writer of a humor column in the Ukiah Daily Journal, she made her own life amidst the care and love she gave so freely to others.
Shirley is preceded in death by her husband, Donald Heller, and her son Jon Heller. She is survived by her sister, Mary Lou Olsen of Marietta, Georgia, her children; Mark Heller, Mary Lou Scott, and Julianna Swan; and her grandchildren; Leon Ruiz, Max and Heidi Heller, Sierra, Ryder, and James Swan, and Jonathan and Joelle Kircher. All of her children had their extended families which she loved just as much. She also loved her rescue dogs, Charley and Fina.
Shirley will rest next to her husband at the Ukiah Cemetery. A private inurnment and a community wide celebration of life have yet to be scheduled.
Gifts of donations made to “Plowshares” and “Meals on Wheels” are appreciated.
For more information please call 707-280-8141, cell/ text, leave your name and phone number. Other contact info: markheller@century21.com .


To order memorial trees or send flowers to the family in memory of Heller, Shirley Ann, please visit our flower store.