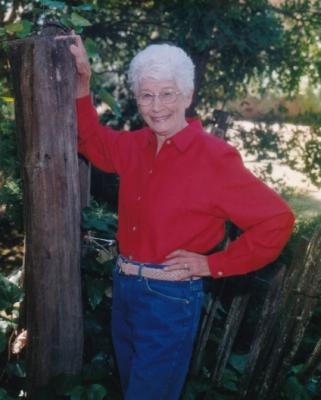 Obituary:
Dale Davonne Gibson Hoover passed away on June 10, 2017. She was born in Fort Bragg, CA, to Jesse Gibson and Helendale Johnston Gibson on June 19, 1925. Dale spent her younger years living at various logging locations around Mendocino County as her father worked in the logging industry. She had many stories to tell about growing up around the lumber mills and logging camps where they lived. In her late teen years Dale spent several summers working alone high atop a mountain in Lake County at the Pinnacle Rock fire tower on fire watch duty for the forest service. During WWII Dale worked in the Benicia shipyard with her sister Beverlee to support the war effort.
Dale met the love of her life, Harold “Wayne” Hoover and they were married on March 23, 1947. Dale and Wayne had one son, Harley Wayne. She loved spending time fly fishing with her husband and son. Dale was a life time member of The Daughters of the American Revolution. She was also a member of the Healdsburg Historical Society, the Fort Bragg-Mendocino Coast Historical Society and ROOTS of Steam Motive Power. Dale and husband, Wayne, were also life time members of the Model A Ford Club of America and enjoyed participating in car shows with their Model A Ford. Dale had an avid interest in the history of Mendocino County and was a life time member of the Mendocino County Historical Society. Dale spent many years working on tracing her family genealogy and traveled across the United States visiting cemeteries and courthouses learning about her family roots. She continued to work on her genealogy projects until her passing 9 days short of her 92 birthday. Dale and Wayne celebrated 57 years of marriage before his passing away in April 2006.
Dale was predeceased by her son, Harley, her sister, Beverlee Rhodes, her brother, Craig Gibson, and her niece, Cindee Rhodes Pickner. Dale is survived by her nephews Morgan Gibson (Norma), Carson Gibson, Martin Gibson (Sally) and her nieces Melodee Rhodes Foster (Steve) and Cheryl Gibson (Martin). At Dale’s request there will be no services. Her ashes will be scattered with her husband’s and son’s on the ranch property they shared for over 50 years. The family suggests that donations may be made to the Mendocino County Historical Society or a charity of their choice.

To order memorial trees or send flowers to the family in memory of Hoover, Dale Davonne Gibson, please visit our flower store.