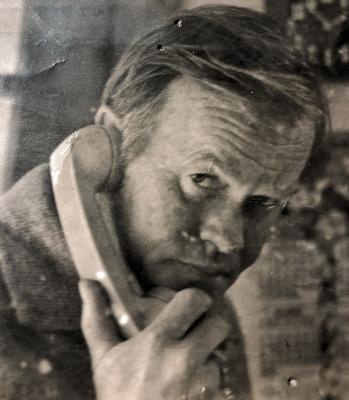 Bill proceeds his wife of 52 years, Kay, and and is survived by his three children Sondra, Bill Junior (Carolyn), Susan Kay and his granddaughters Austin, Lindsay and Peyton.

Bill was born and raised in Ukiah, California. Bill had an enormous zest for life along with a quick wit and a sense of humor that was unmatched.

Bill met his wife Kay at the age of three. They were then placed in the same kindergarten class. Bill sat behind Kay and had a fabulous time pulling Kay’s pigtails. Kay did not find this nearly as much fun as Bill did. Through elementary school Bill would play practical jokes on Kay and other classmates such as taking her bike, playing robbers, taking kids’ school books, jumping out of trees and scaring kids, or sharing pages of his sister Maryellens diary to her suitors for a small fee.

Bill and Kay began dating at the age of 16. He walked into her work at the Doctors office along with his entire group of friends in tow and asked her out. They married when they were 18 in December of 1952. Bill then went off to the Korean War.
He enlisted in Navy and became a telegraphist sending and receiving morse code.
He would proudly make Morse code sounds to his children for the rest of his life. Another takeaway from his Navy stint...his makeshift rendition of Reveille. He thoroughly enjoyed waking everyone up to this awful song in the early mornings. No one in the family actually enjoyed waking up to this, however, Bill always seemed to get great pleasure out of bugging everyone. One thing is for sure: it got us all out of bed.

Bill started his 42 year career at JCPennneys in Ukiah. He began his career in the stockroom as a teenager and worked his way up in the company to become the head of marketing. He even created the JCP Home stores. As he moved up the ranks in the company, he would be transferred to a new city with his family in tow. His first move was from Ukiah to Sacramento. He then moved to Reno, Manhattan, Los Angeles , Portland, San Fransisco, back to Los Angeles, and finally back to Portland. His plan was to retire at 60 and move to Palm Desert for the winters. The goal was to play golf every day, and he accomplished this goal. He would walk out the door every morning with his clubs and shout, “Goin to work!”
Bill and Kay lived in a development called Woodhaven, and Bill became the president of the Woodhaven Country Club HOA. This was after he convinced the entire development to purchase the country club so it would be privately owned.
Bill and Kay’s social calendar was always packed. You would often find photos them in the society page of the Oregonian, throwing dinner parties, hosting impromptu cocktail hours or going to parties. There was never a dull moment. They traveled extensively and often through Europe, Canada and United States.

Bill served on the board of directors for the Oregon School of Art and Craft and the Portland Crime Commission. He also taught a marketing class at Portland State University and traveled to Russia, Budapest and Poland through the university to teach marketing to merchants.

Bill started an annual golf tournament in Reno for retired JCP employees. We believe it was an excuse to meet up and drink with old buddies, but his legacy continues and they are still holding the golf tournament today.

Bill Hovey was one of a kind. He was the life of the party. His laugh contagious, his wit unparalleled, and his love of life shined brightly. He was a practical joker and an expert story teller. One thing is for sure, if Bill Hovey was there, you were going to laugh hard and have the best time.
He taught us it was important to me kind to everyone.
He loved his family fiercely and never missed an important family event...minus the one time he decided to play in golf tournament and arrived three weeks after the birth of his third granddaughter Peyton.

As Bill once said, “It’s never as good as it looks or and bad as it seems” but we bet things are much brighter in heaven.

Bill Hovey was one of a kind, loved dearly by his family and friends. We will miss him dearly.


To order memorial trees or send flowers to the family in memory of Hovey, William Rogers, please visit our flower store.