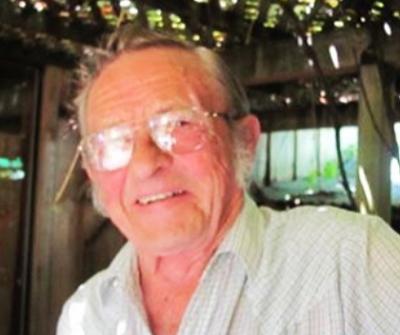 Obituary:
John Henry Hulbert – September 22, 1936 to July 21, 2016.
John Hulbert, 79, passed away peacefully with his wife Linda and step-daughter Melanie at his side on July 21, 2016, at their home in Philo, California.
John was born in his grandmother Annie deRosier’s home at the south end of Boonville on September 22, 1936. His parents were Perry Hulbert and Dorothy “Dot” deRosier Hulbert. He graduated from Anderson Valley High School with the class of 1955, and went to work for Pacific Bell before he was 20 years old. John married Pat Wilson, and they had 3 children, Terri Lynn, Steven John, and Michael Dean. Later he married Norma Jean Jones, who had two daughters, Diana and Marta, who then became his daughters. John and Norma lived in their home next to the Redwood Drive in for two decades. Norma passed away in 1992, and John married Linda Crispin in 1993 and moved to the Crispin place on Ruddock Road in Philo. Linda has two daughters, Jeanette (Jenny) and Melanie. By this time there were several grandchildren and great-grandchildren. John is survived by his wife, Linda Crispin Hulbert; sisters Judy (Walt) Smith and Donnal Nichols; his three children, three step-children, and lots of grandchildren, great-grandchildren and nieces and nephews.
John was very active in valley activities. He served as Director of Mendocino County Fair Board for over 14 years and as chief fundraiser for the parade, without which a former manager states, “there would be no parade!” As “fair ambassador” he would always schedule vacation in order to serve as the “go-to” person during the Apple Fair.
Among his many accomplishments, John spent many evening and weekend hours to raise $15,000 from the community to purchase the jaws-of-life held by the AV Fire Department. He also purchased a television and video player for the local firefighter’s training and entertainment. Additionally, he served on the volunteer ambulance crew for five years as far back as when the ambulance was a station wagon, as a driver and EMT. He coordinated fund raising toward the purchase of the heart monitor for the AV emergency services. John was also a long-time member of the AV Lion’s Club and served on the local Chamber of Commerce for six years.
For 40 years John worked for Pacific Bell, installing phones and lines and doing repairs for all of us. He was known as “Mr. Telephone.” As far as dealing with the phone company for our family, friends and neighbors, John Hulbert was Pacific Bell (quote from June 24, 1985 Pacific Bell Paper). There’s an old letter of commendation from then fair manager Bill Clow which quotes John as being the “best goodwill ambassador Pacific Bell and Mendocino County Fair could hope to have . . . ” In 1990, he won Pac Bell’s “Telesis Award” for Employee Community Service. In 1992, the Anderson Valley Community Services District awarded him for his life-time of active support in this community.
The piles of Commendations, Certificates of Appreciation, awards, and letters from phone company customers his mother had very carefully kept in a box are too numerous to mention. All who knew John are aware of his desire to drop everything to be there for us valley folks. He will be missed by all who knew him for his loving and caring nature, his sense of duty, and his entertaining sense of humor.

To order memorial trees or send flowers to the family in memory of Hulbert, John Henry, please visit our flower store.