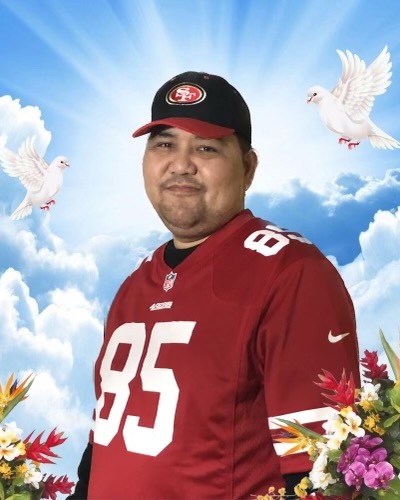 “The late Jason Don Atalig was born on January 7th, 1976 and was raised on the island of Rota, Commonwealth of the Northern Mariana Islands, a small U.S. territory located in the Pacific. He grew up in a loving home with his mother, Joycelynn A. Hocog and his stepfather Lorenzo A. Hocog Sr., alongside his 5 siblings, Joseph, Daisy, Clifford, Shirley and Lorenzo Jr.

He was a wonderful husband to his wife of 24 years, Gracia A. Atalig and was a loving father to his 5 children, Jason Don Jr., Sherry Lynn, Jacelynn, Lorenzo Jay and Jadon.

Jason made it his life’s purpose to help those around him. Those who have met and have gotten to know him, know that he had the biggest heart. His dedication to helping others was fully realized when he decided to own and operate an assisted living facility for the elderly, with his family. Despite his deteriorating health, he tended to his responsibilities at the care home all while ensuring he made time for his family and for every 49ers game.

In his honor, the family has organized a viewing on Thursday (January 12, 2023) from 4pm-8pm at the Eversole Mortuary for friends and family to gather and celebrate his life. There will also be a mass held for Jason at the St. Mary of the Angels Church in Ukiah the following day, Friday (January 13, 2023) at 10am, which will begin with a rosary.”

To order memorial trees or send flowers to the family in memory of Jason Don Atalig, please visit our flower store.