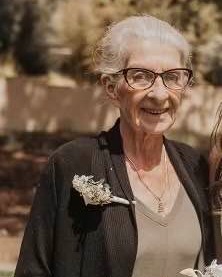 JoAnn Humphries Charles (affectionally known as “Mama”) passed away peacefully on October 12th at her home in Philo surrounded by loving family.

She was born on May 16, 1939, in Reno, Nevada to Jack Humphries and Jean Clow. She spent her early years living on Mare Island where her father worked as an engineer.  JoAnn later moved to her family homestead in Philo where she spent most of her life, but not without several residences elsewhere.

JoAnn met the love of her life and high school sweetheart Norman Charles in Boonville who she later married in 1960 after leaving for college at San Francisco State University.  The couple initially lived in Berkeley before settling in Santa Rosa where JoAnn taught elementary school and Norman ran a dry cleaner.   JoAnn gave birth to three beautiful daughters Dianna, Holly and Suzy Charles who remained by her side until the very end.

Beginning in the early 1970’s, her family moved “back to the land” returning to the Philo homestead living in an Army tent initially for several months while building a home and running a Christmas tree farm.   “Farm to table” was a way of life during these years during which JoAnn taught her daughters to raise animals, grow a garden, churn butter, make their own bread and as she often would say “cook up a storm.”

During the 70’s and 80’s the family took several adventurous road trips together including their annual migration in a van through Baja, California where they camped on the beach and bought seafood from the local fishermen.  In 1985, the family moved to Healdsburg and later in 1993 to Sedona, Arizona making lifelong friendships along the way.

Norman, passed away, far too soon, in 1999.  JoAnn returned to Philo to be with her daughters and while heartbroken, never lost her sense of adventure- traveling the world and eventually buying a condo south of Rosarito, Mexico looking over the ocean in 2007.  While she initially planned on just vacationing at the condo, she soon realized that Mexico was her passion and lived there for most of the year while officially becoming a resident.  She made close friendships in Baja that became like a second family to her while her first family visited her there often.

Besides her three daughters, Mama is survived by nine grandchildren, seven great grandchildren, brother and sister-in-law Bill and Nancy Charles and family, her favorite sons-in-law, and her beloved Mexican poodle Rosa.  She was a shrewd businesswoman, gourmet cook, an avid fly fisherman, and could mix the best bloody mary in town. Playing any game, but especially a card game with Mama was always a barrel of fun during which she would often exclaim in frustration “No wild cards guys!” when looking at a bad hand.

Mama loved her family intensely, had a passion for adventure and “was a little bit country, and a little bit rock n roll”- equally content cooking at a camp site in Albion or dressing up for fine dining in the city.  Your legacy and teachings live on in all of us.  God bless you Mama!

To order memorial trees or send flowers to the family in memory of JoAnn Humphries Charles, please visit our flower store.