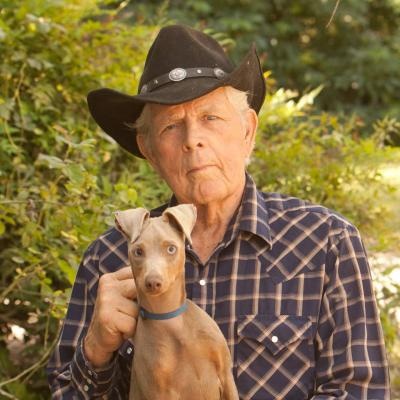 Obituary:
Corliss Kim Johnson, AKA Johnny passed from this world after a short but courageous battle with Cancer. Born to Clark and Doris Johnson, in Belmond Iowa March 11, 1933, Johnny moved many times growing up as his father was in the military. He attended Upper Lake high school and before graduation joined the United States Air Force as he had a desire to be a pilot. But after two years and still not flying he joined the Navy where he started flying very soon. He flew many aircraft but talked most about his time landing fighter jets on aircraft carriers.
After the military Johnny attended various colleges as he worked to get his teaching credential. Along the way he had many part time jobs including working in law enforcement for both San Jose Police Department and Santa Clara Sheriff’s Office, swim and diving instructor. Prior to completing his schooling he met Janice Miller while he was teaching at the Ukiah City pool. They married at the Ukiah First Christian Church on September 14, 1958.
Soon thereafter they moved to Alaska where Johnny attended Alaska State University to finish his degree in education. They returned to the Ukiah area where Johnny started his teaching in Covelo. After Covelo he taught at Pomolita and Redwood Valley Schools, before opening a series of foster homes for teens.
Johnny and Jan started a family in 1960 and had 4 children, the eldest died at the age of two from Hemopholis pneumonia.
He later entered into the construction business and received his Contractors License in 1984. Along the way he dabbled in many other ventures including real estate, tour operator, dance instructor.
Johnny always sought new challenges and opportunities to keep from getting bored! He was a collector of many things as he hated to throw anything away that could be useful somewhere else.
He is survived by his children, Randy (Shirley) Johnson, John (Wendy) Johnson of Ukiah, CA and Catherine (Jim) Reese of Witter Springs, CA . He is also survived by brothers Ted (Rena) of Roseburg, OR. Tom, Jim (Judy), Kurt (Carol) all of Ukiah, CA. and sisters Lorrie (Dan) Harris of Roseburg OR, Bonnie (Ron) Edwards of Burney Falls, CA, Melissa (Gary) Smith of Hopland, CA, Cindy (Jid) Bettinelli of Ukiah, CA. and Pamela (Bill) Martin of Whitmore, CA. Six grandchildren, two great grandchildren, and numerous nieces and nephews. Johnny was predeceased by his parents, Clark “CM” Johnson, Doris Eagelston and Eva “Billie” Johnson, sisters Cozette Enzler and Drucilla Eagelston and his son Ronald Johnson.


To order memorial trees or send flowers to the family in memory of Johnson, Corliss Kim, please visit our flower store.