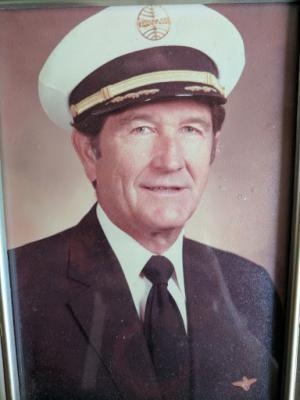 Obituary:
William (Bill) Ralph Jordan passed away peacefully July 21, 2017 at his home in Novato, California. His devoted friend and companion Susannah Cooper was by his side. He was 93. Bill was born on June 10, 1924 in Whittier, California. Bill grew up in Redwood Valley, California and graduated from Ukiah High School in 1942. Bill joined the Navy and received flight training in Pensacola, Florida to become a pilot. Bill attended U.C. Berkeley (or Cal as he called it) in hopes of being a Dentist. Pan American Airlines was hiring and Bill quickly applied to pursue his love of flying and traveling. He was hired as a navigator. He became First Officer, then Captain on the Boeing 747 and Check pilot on the 747. Bill retired in 1984 and was able to devote more time to his love of boating. Bill was a member of the St. Francis Yacht Club, Bel Marin Keys Yacht Club, The Exchange Club of Redwood City, and a member of the Clipper Pioneers. Bill was honored with a medal from the CIA in 2008 for his role as navigator for the covert mission dubbed Operation Coldfeet in 1962. Bill will always be remembered for his quick wit and happy personality, he will be greatly missed.
Bill is survived by his son Lon Jordan of Folsom and his daughter Julie Bowers of Stockton, his grandsons Christopher and Matthew Jordan, his grandson Kyle Styron, his granddaughter Jessica (Bowers) Rose. His great grandson Russell Rose. His sister Phyllis Stewart of San Bernardino and many loving nieces and nephews.
Bill was preceded in death by his mother Julia in 1936, his father Alfred in 1936, his brother Clarence in 1963, his brother George in 1994, and his beloved wife Liselotte in 2002.


To order memorial trees or send flowers to the family in memory of Jordan, William "Bill" Ralph, please visit our flower store.