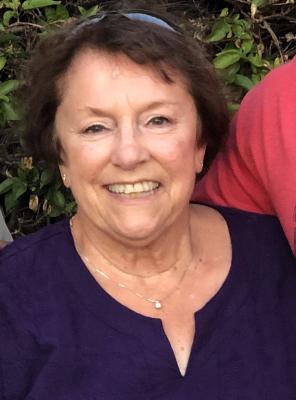 Obituary:
Joyce Elizabeth Keffeler, age 73, passed away on July 17, 2019 in her home with family by her side. She was born May 6, 1946 to the late Lee and Clara Alesch in Marcus, Iowa, and was raised on the family farm with her four sisters. She attended Holy Name Catholic School in Marcus where she met and began dating her late husband, Larry Keffeler. In the 60’s Joyce lived in San Francisco with her sister while Larry was stationed on Angel Island for the U.S. Navy. On May 19, 1973, the High School sweethearts married in their hometown of Marcus at Holy Name Catholic Church. The following year in the summer of 1974 they drove their ‘65 mustang to Ukiah where they began their own family, and owned and operated Harris Pharmacy for 29 years.
Joyce balanced a beautiful and full life while they raised their three children, Ben, Missy, and Tim. When her children were young she ran a small daycare from home before going to work full time with Larry as a pharmacy technician. Joyce was a dedicated wife, mother, grandmother, sister, aunt, and friend. Her most treasured times were summer road trips driving back to Iowa with her husband and three young children, family trips to Hawaii with all her children and grandchildren, sisters’ trips with her four cherished sisters, and girls’ trips with her valued friends.
Her seven grandchildren were the light and center of her life. She was sure to make every sporting game, competition, performance, awards assembly, and any other event they were a part of-she was their number one fan and supporter.
When Joyce wasn’t with her family or traveling, she could be found volunteering for Friends Who Care, Plowshares, Meals on Wheels, and Soroptimist. Playing Bunko on Thursday nights, enjoying a cool ocean breeze in Bodega Bay, and getting to a poker or blackjack table were always added highlights for her.
She was one of God’s gifts to us on this earth, and has now been reunited with her beloved husband in Heaven. She will be missed down here more than words can convey as she is survived by her children Ben (Teresa) Keffeler, Missy (Zach) Schat, and Tim (Andrea) Keffeler; her grandchildren Ryan, Grant, Sabrina, Luke, Kate, Jax, and Elle; her sisters Leone (Jim) Hoefling, Joanne (Tom) Corcoran, Fran (Dennis) Blasberg, and Corinne Alesch; along with numerous treasured cousins, nieces, and nephews.
Services will be held Friday, July 26th at St. Mary of the Angel Catholic Church at 10:00am, followed by a gathering in the Parish Hall with food and drinks served. There will also be a viewing at Eversole Mortuary on Thursday evening from 2:00pm-8:00pm, with a Rosary at 6:00pm. In lieu of flowers, donations can be sent to The Community Foundation of Mendocino County on behalf of The Joyce Keffeler Memorial Medical Services Scholarship.

To order memorial trees or send flowers to the family in memory of Keffeler, Joyce Elizabeth, please visit our flower store.