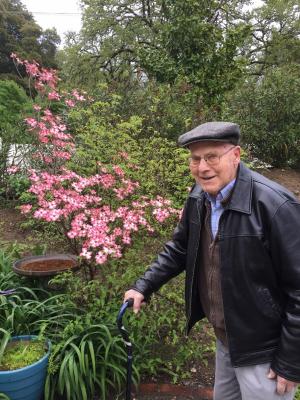 Obituary:
Floyd Clifton Lawrence, 102, of Ukiah passed away on May 23, 2017 at Holy Child Care Home with his daughter Joan by his side. Floyd was born in Ukiah November 30, 1914.
Floyd attended school in Ukiah. On April 16, 1942 Floyd enlisted as Carpenter’s Mate Second Class in the United States Navy for 2 years. His character of service was excellent and he received USNR and Honorable Service Lapel Buttons Issued, Construction Battalion, 6th Navel Construction Brigade out of Shoemaker, California. He received his Honorable Discharge from the United States Navy on September 6, 1945.
Floyd was the Superintendent of Building and Grounds for the County of Mendocino. He along with Arnold Bogner and John Mayfield, Sr. were responsible for the formation of Millview Water District. He was on the board for over 20 years.
He was Construction Superintendent Contractor that built Masonite. Barrett & Hilp financed the project; Ted Rhodes worked directly with both Barrett & Hilp and Floyd. Ted Rhodes became a wonderful friend and Ted spent many weekends at Floyd and Alma’s enjoying her amazing meals she prepared. John Mayfield met Floyd when he was 14 years old and received his driver’s license to deliver the lumber from his parent’s mill on Orr Springs Road known as Mendo Mill and lumber Company which Floyd used to build Masonite.
Floyd and Charlie Cobb built the Safeway Store in Ukiah. He helped build the Ukiah Presbyterian Church. Floyd was instrumental in the conversion of the County Hospital for other uses and also expanded and remodeled the Broiler Steak House. Floyd worked with Al Beltrami, Mendocino County Administrative Officer for a long time making sure the County buildings were built correctly and kept up to date.
Floyd and John Mayfield tried to get a bridge built at the end of Redemeyer Road to Lake Mendocino Drive. Floyd’s father, William Franklin Lawrence built Redemeyer Road with a team of horses and a grader over 100 years ago. Floyd and John worked with Bill Wolf for the Corp of Army Engineers to get the bridge built. John moved to Sacramento in 1968 and Bill wolf died in a car accident, which left Floyd to try to make the bridge happen. He was unsuccessful and there is no outlet at the end of Redemeyer Road to this day.
For the past 4 years Floyd lived with his daughter Joan, one of his favorite sayings while living with her was “I hear what you are saying!”
Floyds religious beliefs were Protestant.

Floyd married the late Alma Dorothy Eva Hoffman on February 15, 1948 at St. Luke’s Lutheran Church in Santa Rosa, Ca.
Floyd is survived by his daughters Joan Linda Nelson of Ukiah, Ca. and Carol Lynn Palmer of Tillamook, Or. brother Phil Lawrence of Bend, Or. 8 grandchildren and 7 great grandchildren and the 8th on its way. Floyd was preceded in death by his wife Alma, two sisters and two older brothers, his father and his mother.
A Memorial Service will be held at the Eversole Mortuary on Saturday, July 1, 2017 at 10:00 AM. following by Celebration of Life and lunch at the Ukiah Senior Center where Dad was an active member of the Lunch Bunch, which he thoroughly enjoyed. Floyd’s ashes will be buried in the Santa Rosa Memorial Park Cemetery following the Celebration of Life at the Senior Center.
Anyone wishing to make Memorial donations in Floyd’s name please make it to Ukiah Senior Center.
Joan wanted to share a poem that Floyd wrote to his older brother, Harold in 1981

Enclosed is a check.
Tis money well spent
Cause we enjoyed each other
Where ever we went.

I chose the wet side
And you chose the dry
As we clobbered those pheasants
Sometimes on the fly.

Your Shepherd was busy
And sure did his best
But wouldn’t retrieve them
To put in your vest.

I stepped in the water
Clear over my boot
And before I recovered
It was too late to shoot.


We missed some of the roosters
But the hens got in the way
As we completed our limit
Quite early in the day.

We stopped at the office
To have the tags tied.
Had coffee and doughnuts
And then went for a ride

We were back in Ukiah
By the time it was dark.
And were both in agreement
It was surely a lark

The water was heated
And the feathers were picked
The innards removed
And we nether got kicked.

The birds were suspended
From the rafters above
As we ended our day
Of real brotherly love.


To order memorial trees or send flowers to the family in memory of Lawrence, Floyd Clifton, please visit our flower store.