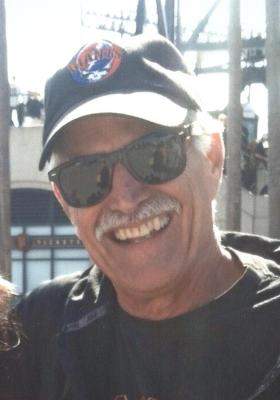 Obituary:
Steven (Steve) Marc Lawrence passed away at his home with his family by his side on November 9, 2015 after a short but hard fought battle with cancer. Born on July 19, 1949 he was just 66 years old. Steve is survived by his loving wife of 29 years Maureen, his son Matthew and daughter Corey Garman. He was the oldest son of Clifford and Carole Lawrence.

Steve moved to Mendocino County in 1986 and worked at various jobs in the wine industry including many years at Fetzer Vineyards and Redwood Valley Cellars. The last 16 years he was employed by the United States Postal Service as a clerk in the Willits Post Office. He became part of the Willits Postal family. Throughout his illness the postal family never stopped sending cards, flowers and gifts that certainly brightened his day until the very end. He knew that he was always in their thoughts and prayers.

Steve was proud to be an Army veteran and served in the Vietnam War during 1968 and 1969. Steve’s family would like to give a special thanks for all the help he received from the VA’s Ukiah Clinic and the teams of doctors and nurses from the San Francisco VA hospital. We would also like to thank the staff at Dr. Wang’s office (Shannon, Rea, and Janice) for taking such good care of him during this very difficult time.

Steve was an avid golfer and loved to go to the Ukiah Golf Course whenever he could get there. He was a member of the Ukiah Men’s Golf Club and loved going to the golf dinners once a month. He loved the comradery of being with his fellow golfers. He was also a member of the Duffer’s Club for many years.

When Steve wasn’t working or golfing he was in the backyard of his home planting and tending to his other passion his gardening. His garden was his pride and joy, as was taking care of his cat Mister.

He is survived by his brothers Gary Lawrence (Marsha) and Christopher Carrington (Juliet) and sister Claudia Noel, step mother Carol Lawrence along with step siblings in the Lawrence family. Brother-in-law, Ed Keveney (Patti), sisters-in-law Colleen Keveney (Butch) and Diane Morrow. Steve is also survived by many nieces and nephews and great nieces and nephews on both sides of the family.

Services will be held at Eversole Mortuary on Friday, November 20, 2015 at 11:00 AM. In lieu of flowers please make donations to the Cancer Resource Center of Ukiah.


To order memorial trees or send flowers to the family in memory of Lawrence, Steven Marc, please visit our flower store.