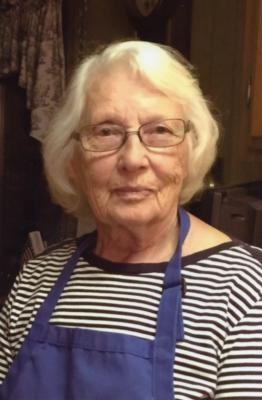 Obituary:
At her home, surrounded by family, Billie June Lemons passed after a brief illness on August 7, 2018.
June is survived by her children William Thomas Lemons (Connie), Beverly Lemons Daniels (Steve), grandchildren Thomas Edward Lemons, Tonya Daniels Miles (Jeremy), Johnathan Matthew Lemons (Erica), Tracy Annette Daniels, Daniel Wade Lemons, and 7 great grandchildren. June is also survived by her sister Keitha McAdoo (Dean), brothers Lonnie Basinger and Jimmy Basinger, and her sisters-in-law Gloria Basinger and Helen Lemons Dolan, and numerous nieces, nephews and cousins. She was predeceased by her husband Elmer Thomas Lemons, parents Joe and Maude Basinger, brothers Murriel Brown and Lloyd Basinger and sisters-in-law Pat Brown and Ann Basinger.
June was born on June 4, 1927 in McLoud, Oklahoma to Joe and Maude Basinger, the second of six children. She worked part-time at a local mercantile and still managed to graduate from McLoud High School as valedictorian in 1945. Choosing not to pursue a teaching career, she instead married her long time sweetheart, Elmer Lemons. Shortly after, they moved to California. They welcomed son Tommy in the fall of 1946 and daughter Beverly in the fall of 1949. In the early 50’s they ventured north, found Anderson Valley and made it their forever home.
Well rounded in her talents, June excelled in the home arts of gardening, canning, sewing, and quilting. When her children became self-sufficient, she joined the working class once more. June found means of keeping busy by packing apples, working in a laundromat, and working a Jack’s Valley Store. In January 1973, the Philo Market was for sale. Elmer and June jumped at the opportunity and turned the gamble into success. In 1981, the property also became on the market and with son Tom as a partner, they became not only operators of the store but owner/operators of the store and landlords to the tenants of the trailer park and Philo Café.
June retired in 1992 at which time she took her hobbies to a whole new level. She enjoyed the Mendocino County Fair very much and has a box full of ribbons from her pieced quilts, embroidery, clothing projects, zucchini bread, dill pickles, and canned salmon. June was famous for her rum cakes, which raised thousands of dollars over the years for charitable auctions. In addition to spending time with her family, June enjoyed the Senior Citizens program in Boonville and was a docent for the Anderson Valley Museum for a long while.
June enjoyed her travels, having the opportunity to see the Statue of Liberty (that wasn’t in a picture) and a play on Broadway. She enjoyed vacationing with her siblings on the beaches of Texas, and once took a trip to Denali National Park in Alaska where she saw bear, moose, and caribou. June, along with Margie Miles shot an Elk while on a hunting trip.
Active until the end, she still has a quilt in progress, still attached to her sewing machine. She will be missed.
Details of arrangements are as follows: Viewing: Sunday, August 12, 2018 11:00am – 1:00pm, Eversole Mortuary. Graveside Services: Monday, August 13, 2018 11:30am, Evergreen Cemetery. Potluck following immediately: Anderson Valley Fairgrounds Dining Room.
In lieu of flowers, donations would be appreciated to any of the following: Anderson Valley Senior Citizens in Boonville, Anderson Valley Health Center.

To order memorial trees or send flowers to the family in memory of Lemons, Billie June, please visit our flower store.