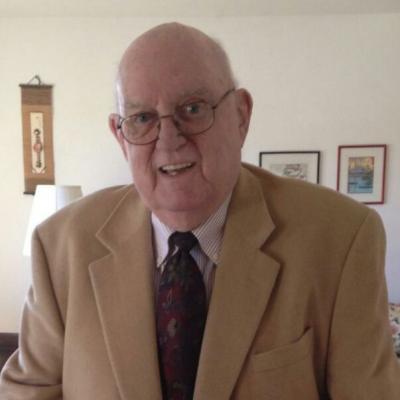 He and Jane were married on June 5, 1943. He served in the U.S. Navy during WWII as a junior officer (LTJG) on the USS Tingey and returned home afterward to Wisconsin where he and Jane raised their family. In 1961 they moved to Orange County California, where they lived for the next 30 years, with the exception of a two year period in which they lived in Reno, Nevada. During his long and successful career as a metallurgical expert in VP and presidential positions, he travelled extensively and made friends around the world. Aside from work, he and Jane were both active volunteers, mostly through their church. Both were lifelong members of the Roman Catholic faith.

They moved from Southern California to Ukiah in 1990 when Russ filled the role of VP, General Manager at Remco in Willits. Originally, a temporary situation, Russ and Jane fell in love with Ukiah and decided to make it their permanent home. They joined St. Mary’s Catholic Church in Ukiah and jumped right into volunteer work. Russ was active in Plowshares, served as a docent at the Grace Hudson Museum, and was on the finance committee at St. Mary’s. This fell in line with Russ’ giving and generous nature. I think many have stories of his kindness and generosity, probably some that we don’t even know about. Among his many wonderful traits, another that stood out was his integrity. He was also blessed with great intelligence, a remarkable memory, and had an unlimited reservoir of knowledge. Whatever question you had on just about any topic, he seemed to know the answer. He seemed to have knowledge about anything and everything. If there was something where we needed more information, the answer was always, “ask Dad, he’ll know”.

Russ always enjoyed having his children, grandchildren, and great grandchildren come up for visits after moving to Ukiah. He will be greatly missed by his family who loved him so much, as well as by his many wonderful friends. On June 29, 2016, the Lord reached out and took the hand of a most wonderful soul and welcomed him into heaven where he was reunited with his beloved Jane.

In lieu of flowers the family requests a memorial donation to:

To order memorial trees or send flowers to the family in memory of Libert, Russell David, please visit our flower store.