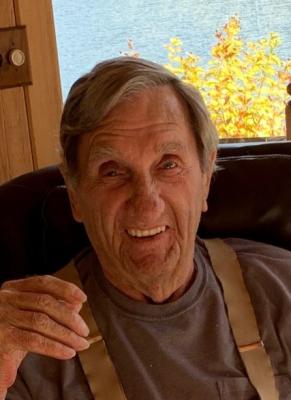 Passed away peacefully at the age of 86 in his home at Blue Lake on August 8, 2020 surrounded by his family. He is now with his beloved Donna Mae, his wife of 60 years, his parents Catherine and Herman Mattern, his brothers Raymond, Robert, Herman, Andy and his sister Evelyn. He is survived by his daughters Dr. Jill Mattern and Julie Golden of Ukiah and her husband Joe, their children Connor, Ryan, Kaili and Liya; his son John Mattern of Ukiah and wife Inger, their children Tucker and wife Tess, Leif and wife Erica and Shayne Mattern; his nephew Ernest Wipf of Ukiah and his wife Eileen, their daughters, Tedi and Michaelyn; his nephews/nieces: Erich Mattern, Jim Mattern, Andy Mattern, Marna Duncan, Cindy Ahre, Shari Brown, Barbara Cubberly and Deanne Nelson.

Rich was born December 17, 1933 on his family’s farm on South State Street in Ukiah. His father Herman immigrated from Germany in 1903 to America at the age of 14, a farmer who founded with his brother William Mattern, the first bakeries in Ukiah; the Model on State Street and the City Bakery on Perkins (today’s Schat’s Bakery). His mother Catherine Zapf arrived in 1926, also from Germany. Herman and Catherine were introduced to each other in Ukiah by Doc Cleland. Rich grew up on the family farm growing hops and running their small dairy, and left school to work full time upon his father’s passing in 1945 at the age of 12. He loved his mother beyond words and visited or called her every day until her passing in 1958. He was a self-made man; one of the earliest construction equipment operators and built Mattern Construction (now Wipf Construction) and Mattern Sand and Gravel into successful operations. Like his father before him, he was a lifelong farmer and an early planter of grapes on his Ukiah and Talmage ranches. He was famous for his quality Zin, ‘Petty Sarah’ and ‘Kerrigin-Ann’ grapes and a founding member of the Allied Grape Growers.

He married Donna Mae Hammons in 1954, a particularly attractive “carhop” on roller skates he met at the Beacon Drive-In. This started a 60 year love story that shaped us all. He and Donna spent many anniversaries and celebrations dancing on the deck at Le Trianon on Blue Lakes. They summered with family and friends at the resort and in 1979 he built his love a cabin there. In later years, they spent winters at their home on Maui and summers at the cabin, enjoying the water and the sunsets. Rich was a straight shooter, as honest as the day is long, you always knew where he stood on any subject, whether you agreed or not. His wit and dry humor offended some but endeared those close to him. He was a creature of habit, he loved the Beacon, the Garden Café, the Truck Stop and the Broiler (on Thursday nights). These were his comfort places. Through his lifetime he always had dogs to whom he slipped food under the table, he would refer to them as the “clean-up crew”. He loved the simple things in life but more than anything he loved his family.

Although he worked day and night to support his family he always made time for friends and family. Whether it was comforting a colicky baby with tractor rides, leading the family in horse-drawn parades, flying his plane and tossing G.I. Joe parachutes to us in the back yard, attending Pop Warner Football games, showing horses in the summer heat, careening down the ski slopes, sitting in his motor home or the nose-bleed sections at music concerts waiting for us, water skiing during camping trips or listening to his son play music, he always made wonderful memories with his family that we will cherish forever.

Throughout his entire life, he was always there for his wife, children, siblings, family and friends both in good times and in bad. He was a man of principle and most of all, one who acted with honor, dignity for others and respect for all. He faithfully followed and practiced these principles every day of his life. He was always kind, caring and grateful to those around him. A true friend, gentleman, and genuinely lovely man. He will be missed.

Richard Herman Mattern will be laid to rest in a Private Graveside Burial. A Celebration of Life will be held where all of his friends and family will be invited to share their appreciation and memories of him at a time hopefully in the not too distant future when it’s safe for all of us to gather.

Memorial donations can be sent to
The Buck Institute for the Science of Aging
8001 Redwood Blvd, Novato 94945
Buckinstitute.org

To order memorial trees or send flowers to the family in memory of Mattern, Richard Herman, please visit our flower store.