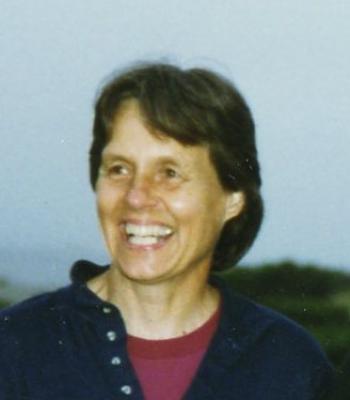 Ginny grew up with three sisters in several small towns in Minnesota, where her father was the superintendent of schools. She graduated from the University of Minnesota with a BA in Elementary Education (1956), and an MA in Curriculum and Instruction (1964).

As a young adult, Ginny taught 4th grade in Minnesota and Washington, and worked at a YMCA summer camp in Estes Park, Colorado. Later, while honeymooning around the world with her husband, Sid W., she visited schools to collect data for her master’s thesis. The travel bug never left Ginny, as she and Sid lived in Turkey for two years, then continued a lifetime of adventure from Alaska to Guatemala and beyond.

Above all, Ginny loved her family. She had a deep affection for her husband, children, and grandchildren. Nothing would make her happier than to sit around the table with her family for a big meal, or backpack with them in the Trinity Alps or Sierras.

Those who knew Ginny well were touched by her calm competence and her respect for all people. After moving to Ukiah in 1969 with her young family, she served as a Ukiah Unified School Board member for seven years. Ginny later taught kindergarten at Calpella Elementary School (1984-2005). She was a dedicated, skilled teacher, attuned to her students’ needs and loved by her colleagues.

Throughout her life, Ginny juggled her multiple responsibilities and interests with grace and gusto. She valued volunteering in the community, most recently with Plowshares, and she was an avid tennis player, runner, hiker, and cross-country skier. At the age of sixty, she took up basketball and became a Coyote Valley All-star player. Reading and classical music were also significant in Ginny’s life. She played flute and piccolo in her youth, and sang in the Mendocino College choir as an adult.

Ginny was an exemplary woman, who will be greatly missed. A memorial service will be held at 1:00 p.m. on Saturday, November 12, at Grace Lutheran Church, in Ukiah, California, with a reception to follow. Memorial gifts in Ginny’s memory can be made to the Michael J. Fox Foundation for Parkinson’s Research.

To order memorial trees or send flowers to the family in memory of Maurer, Virginia Harbo, please visit our flower store.