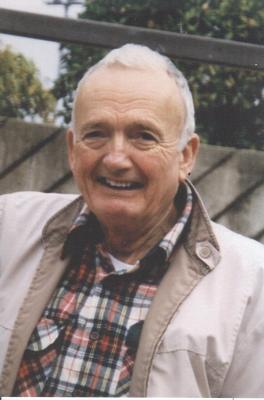 Obituary:
Elmer Franklin McDade
“Mr. Mac”- Elmer Franklin McDade, Beloved Patriarch and cherished friend was promoted to Glory early on Saturday, August 9th at Cloverdale Health Care Center while trying to recover from an emergency surgery.
He was born May 24, 1925 in Des Moines, Iowa to Rachel and the Reverend Paul McDade. He grew up all over Iowa as his father moved from Parrish to Parrish. He graduated Ogden High in 1943 but was ranked 4-F for health reasons in World War II. He graduated Iowa State in 1949 and worked as a timber cruiser in the western states. It was while he was in southern Oregon that he met the love of his life Janice Houghton, who waited for him as he served in the HQ battery of the 158 field artillery battalion of the 45th Infantry Thunderbird Division of the US Army from 1951-1952 in the Korean War.
They were married in Medford, Oregon on October 11, 1952, a week after he landed in San Francisco from Korea. Using the education opportunity of the GI bill he earned his Masters of Forest Products at Oregon State. They were blessed with 5 children who grew up in Santa Rosa and Ukiah.
His first career was the lumber industry, but finding himself restless in retirement, he started working for Ukiah school district. First he was a Foster Grandparent at Hopland Elementary but rapidly applied for his substitute teacher credential. He substituted everything from Kindergarten to High School Calculus classes. However his real niche was in the Middle Schools and anyone who had Mr. Mac was taught about Respect, The Pledge of Allegiance, The Golden Rule (treating others as you would have them treat you), and of course the Korean War. He taught until this last January when he just could no longer get around the campuses.
Some of his other joys and hobbies included volunteering as a docent at the Sun House, volunteering for meals on wheels, singing in the church choir and with Barber shop Quartets. He was a member of the VFW local post 1900, the lumbermen’s Hoo Hoo Club (don’t laugh 2 American Presidents were Hoo Hoo’s) and the local fraternal luncheon Cannibals club.
He is predeceased by his parents Paul and Rachel, sister and brother-in-law Dorthy (Bob) Johns, brother-in-law Alf Guldahl, and grandson Matthew Poor.
He is survived by his wife Janny Lou. Children – Jennifer (Bill) Ballow, Susan (Johnny) Poor, Scott (Lisa) McDade, Marty (Doug) Daut, and Nancy (Rick) Thornton. Grandchildren – Sara (Ryan) Spencer, John Samuel Poor, Allison (Alex) Stone, Scott Ware, Steven (Heidi) Poor, Jesse (Lesli) McDade, Tanner McDade, Ryan Daut, Rachel Thornton, Tyler Thornton, and Reid Daut. Great Grandchildren John, Nichole, Macaela, Kenzy, Leto, Jackson, and Broderick. Also his in-laws Harriett Guldahl, Marcia (Dick) Padgham, David (Debbie) Houghton and all their children.
His service will be held on Saturday, August 16, 2014 at 11:00 a.m. at The Holy Trinity Church in Ukiah. In lieu of flowers and in honor of his memory the family would like everyone to remember to be kind and respectful of others.
Eversole Mortuary is in charge of arrangements.

To order memorial trees or send flowers to the family in memory of McDade, Elmer Franklin, please visit our flower store.