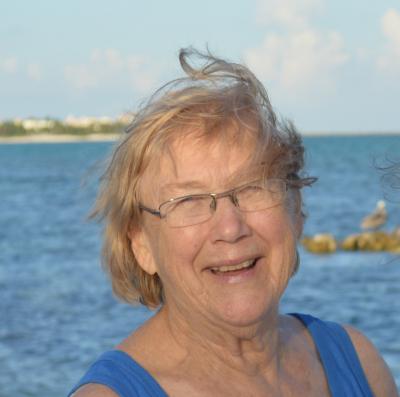 Obituary:
Bernadette Bridget McKeon was born in San Francisco on October 8, 1930, to Nora and John Farley, emigrants from County Cavan, Ireland. She died peacefully on January 23, 2017 in Ukiah Ca., surrounded by family at her home of 56 years.
Bernadette graduated from Drew School at age 16. At age 20, and along with her fiancé Terrence, she graduated from UC Berkeley with a degree in English. They married in June 1951. In 1952 they started a family and Terry started teaching in Hopland. In 1957 the growing family moved to Ukiah where Terry taught at Ukiah High. After their four children started school, Bernadette began her 34 year teaching career in 1965. She taught kindergarten and first grade at Nokomis School for many years. In the 1980s she started a computer lab there and worked with the Mendocino County Office of Education to integrate computers in classrooms throughout the county.
Bernadette’s faith in god and the tenants of Catholicism were pillars of her devotion to her family, community service, education, the arts, equality, and her country. She served on the County Library board, was a lifelong member of Ukiah Community Concert Association, a Lifetime member of American Association of University Women, and a Girl Scouts leader. Bernadette and Terry helped build Yokayo Pool and Racquet Club. Their social life included many lifelong friends, and informal bridge and dinner clubs. Family highlights included ski trips at Shasta, Lassen, and Tahoe, camping at Van Damme Park or in the mountains with family friends, and long road trips through the western United States, Mexico, and Canada. In retirement, Bernadette and Terry took great joy in spending time with their children and grandchildren and with their friends, and in exploring the world together.
Bernadette was preceded in death by her parents Nora and John, her beloved Terrence, siblings John, Patrick, Kathleen, and Noreen, and brothers-in-law Thomas McKeon, Joe Boden, Ben Murphy and Bill Newman. She is survived by her sister Ann Newman, her children Genny and Dennis Byrne, John McKeon, Tom and Laura McKeon and Matt and Cathy McKeon, and grandchildren Kerry and Jason, Kathleen and Deependra, Cailee, Christine, Katherine, Matthew, Elizabeth, Jennifer, Daniel and Devon. Bernadette’s family and many dear relatives, friends, colleagues and students will cherish memories of her wonderful smile, engaging mind, and always generous love, friendship, compassion, and understanding. Recitation of the Rosary will be held on Friday, February 3, 2017 at 7 p.m. at Eversole Mortuary, Mass of the Christian Burial will be held on Saturday, February 4, 2017 at 11 a.m. at St. Mary of the Angels Catholic Church.

To order memorial trees or send flowers to the family in memory of McKeon, Bernadette Bridget, please visit our flower store.